… and evidently, so do the 490 commenters that replied to Mia Freedman’s post on her blog, MamaMia, about the books that are currently “dwarfing” her bedside table. 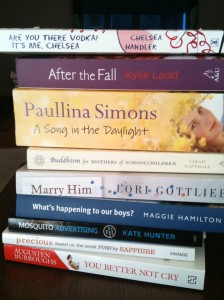 I have a similar pile of magazines that are threatening to do the same next to my bed.

However, I seem to be getting through the books nicely.

I just finished reading Freedman’s memoir, Mama Mia: A Memoir of Mistakes, Magazines and Motherhood for the second time, the review of which I posted yesterday, as well as Stephenie Meyer’s new Twilight tome, The Short Second Life of Bree Tanner, who was introduced in Eclipse, the movie version of which comes out in a little more than two weeks.

After that, I have some Babysitters Club books I want to get back into and review (not suitable for public transport, so will have to set aside some designated home-time reading), Kathy Charles’ murder mystery, Hollywood Ending, which I still need to actually purchase, and American Psycho, which will no doubt take me an eternity to read, but Bret Easton Ellis is coming to Melbourne in August and I would love to tie a review of it in with his visit.

Oh, the perils of being a bookworm, hey?

3 thoughts on “MamaMia Feels My Pain…”