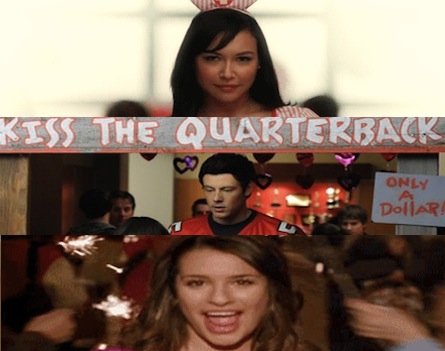 Last night’s episode of Glee had some semblance of a storyline, unlike most of its companion episodes this year.

Santana was ousted by the glee club as a bitch, Puck serenaded Lauren, who refused to be wooed by his misogynistic rendition of  “Fat Bottomed Girls”, and Finn attempted to court Quinn at his Valentine’s Day kissing booth.

By far the best song of the night was Artie and Mike’s collaboration on Michael Jackson’s “P.Y.T.”, which I have taken the liberty of embedding below.

Another key story arc was Kurt’s continued infatuation with Blaine, who serenades another man with Robin Thicke’s “When I Get You Alone” (again, below), another standout. Not to worry; although Blaine is rebuffed by his love interest, and Kurt confesses his feelings for his, the two are back being besties before the night’s through.

Don’t you just love how life on Glee comes packaged up nicely with a pretty ribbon on top after forty minutes…?

The (Belated) Underlying Message in Glee’s “Never Been Kissed” Episode.