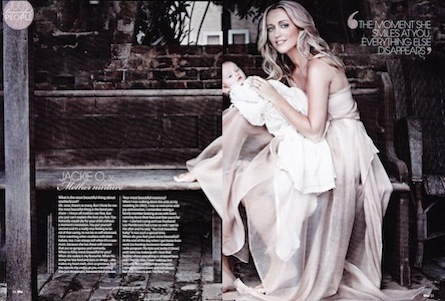 A couple of weeks ago, Jackie O was vilified by the Minister for Families, Pru Goward, for feeding her baby Kitty whilst crossing the road, and most women everywhere jumped to her defence.

As one of Who’s “Most Beautiful People” for 2011, she explains her role as a mother:

“… I think for me the most beautiful thing is the bond you share [with your child]—I know all mothers say that, but you just can’t explain the love you feel. You honestly would die for your child without a moment’s hesitation. You put yourself second and it’s a really nice feeling to be rid of that vanity, to not be so self-obsessed. I love watching other mothers with their babies, too…”

Given the outrage Goward’s comments sparked by women in the media, it seems very timely that Who chose O as one of their finalists this year, and chose instead to focus on the wonderful things about motherhood, as opposed to the mistakes—according to Goward, at least—a new mum is bound to make.

Elsewhere: [MamaMia] Jackie O & the Twisted Politics of Being a Bad Mother.

[Girl with a Satchel] Jackie O, Michael Clarke & the Pillorying of Pretty People.