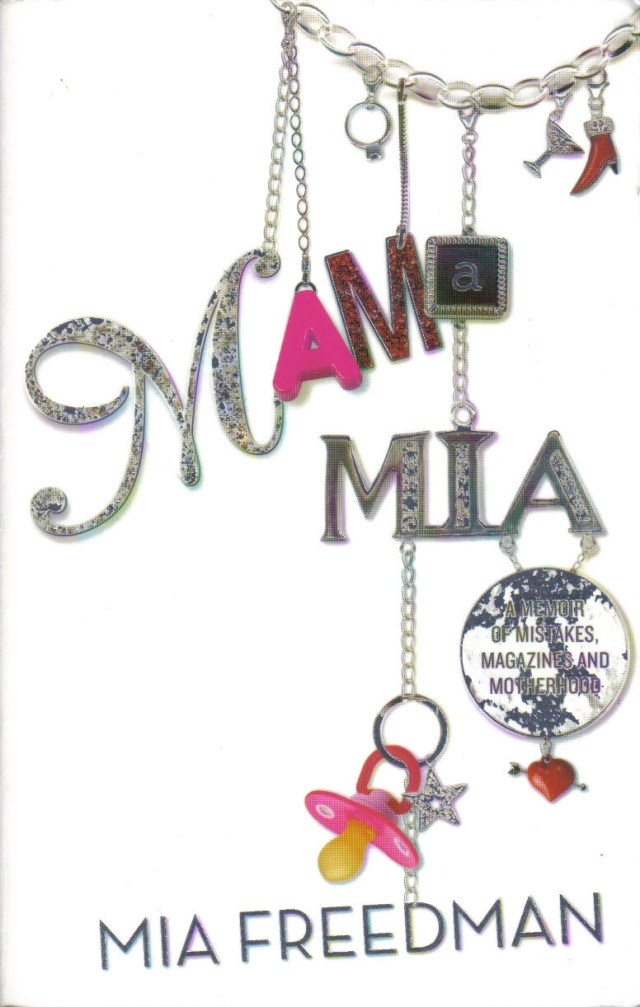 It’s no secret that Mia Freedman of Cosmo fame is my idol. She writes fabulously and is super down-to-earth yet eccentric. How do I know this? No, I don’t know her personally (I wish!), but I feel like I do from the way she writes her column and blog posts; so unabashedly open and hilariously true-to-life.

So you can imagine that when her memoir Mama Mia: A Memoir of Mistakes, Magazines & Motherhood came out last year, I was on that bandwagon faster than you can say “drag queen Kylie Minogue” (the theme for the opening chapter).

I loved, loved, LOVED the memoir and read it twice before re-reading it for this post. Some things stuck out in my mind, such as the way she describes blow-drying her hair whilst having contractions (“I took the opportunity to shower and wash my hair and use my travel blow-dryer… this was about as effective as having a small dog pant on my head.”) and packing a Collette Dinnigan dress to wear during the birth of her first child.

I could honestly go on and on about the merits of this memoir and just how fucking brilliant Freedman is as a writer and a woman in general, but instead, I’ve divided them into seven bite-sized reasons-to-read-the-book, replete with a myriad of quotes, to consume at your leisure.

I distinctly remember, even though I was thirteen and not yet allowed to read Cosmo, seeing Freedman being interviewed on one of the tabloid news programs after the furore that erupted over her decision to put Big Brother’s Sara-Marie, along with Britney Spears, on a flip-cover edition of Cosmo. This is what she has to say about that:

Me: “That’s absolutely not true. I won’t pretend my job as an editor is not to sell magazines. Of course it is. But Cosmo is not new to the issue of body image. And this could never be described as a cynical or token gesture. We’re the only women’s magazine to feature women up to size sixteen every single month.”

The book also deals with Freedman’s present-day inner conflict over airbrushing the crap out of the magazines models and celebrities. But she admits that, “Sometimes I did change bodies but only to make them bigger. Oh, and to attach them to different heads.”

I always put Freedman on a pedestal during her editorship at Cosmo, but it’s nice to know she is actually a real person, not a devil wearing Prada as so many mag editors are made out to be, as the memoir conveys. She has a knack for self-deprecating humour, with such gems as, “Jason has lived with me for more than ten years and is used to my ability to create unwanted, unnecessary and unpleasant drama out of a perfectly nice evening,” when she decides to induce her own labour, “Department store cosmetic counters intimidate me. They still do,” and, on the more extreme end of the spectrum, “I no longer had his anger in my face, his clothes in my cupboard or his bong on my coffee table”!

“Bombarding myself with pop culture, diving in deep and splashing happily around is my idea of relaxation. It’s how I unwind.” Me too, Mia. Me too. (If you’ve seen my stack, you will know just how far this obsession goes.) However, when your son tells you, “‘Sometimes it seems like you love magazines more than you love me,’” it’s time for a perspective check.

A recent spate of mag editors have been taking to their Editor’s Letters to expose the tedious task of choosing a cover each month, however Freedman was one of the first to do so in Mama Mia.

She questions her ability as a mother…

… “Namely, WHAT THE HELL DO YOU DO WITH A BABY”! Freedman’s blissful ignorance as a first-time mum at 25 is a major aspect of the book.

At first, I was put off by the “motherhood” aspect. As a single 22-year-old, I don’t want to be reading about pregnancy and babies—I can get Cosmo Pregnancy for that. But in all honesty, “motherhood” is the best aspect of the book; it makes the memoir at once endearing and witty.

If you know anything about Freedman, you will know that her first child, Luca, was a welcome mistake that happened just after she accepted the editorship of Cosmo. Then came Coco eight years later, who put an end to Freedman’s fertility struggle and “reminded [her] how great it is that my first child is old enough to fetch me chocolate biscuits” during gestation. Finally, before her career segue into “the big head-fuck of TV” Freedman gave birth to Remy, “pure and uncomplicated… sunshine”.

A highlight is when she informs her boss, Pat Ingram, that she’s pregnant… but can still, like, totally do the job. “I only need three months [off] max…”, she told her. When Ingram lays down the law with no less than four months maternity leave for Freedman, Freedman asks, “But what will I do all day?… Surely the baby will, you know, eat and sleep a lot and I’ll have quite a lot of spare time, won’t I?”

Oh, how wrong she was!

Again, Freedman believes her parenting skills leave much to be desired, as you can see in these choice quotes on the topic:

– “Somewhere in one of the books Jason had read that a baby should associate long sleeps with his cot so you should only put him in there at night. This meant during the day we played with him until he passed out wherever he happened to be lying, no doubt dreaming of parents who knew what they were doing.”

– “‘Your daughter has one of the more extreme dummy addictions I’ve ever seen’… Super. Almost six months old and battling her first addiction… I first gave her a dummy at four weeks. Bad mother?… Soon, the mere act of buying dummies would cheer me up. They’d replaced shoes as the object of my retail therapy.”

– “When I picked her up, I half expected to see betrayal in her eyes, as if to say, ‘So where the hell were you last night, bitch?’ But her face was as open and as delighted to see me as ever. She appeared undamaged. Lifelong gift.”

– “To keep my spirits up and my perspective in check, I’d regularly remind myself how lucky I was… to have happy, healthy children I adore. How lucky I was not to be camping. Or homeless. When all of this lost its cheering power, I dug deeper, trying to summon gratitude for having limbs, oxygen and the ability to blink.”

– “Even when the sun is out, family holidays can leave me in need of a stiff drink and a long lie-down. Or, in the case of ten consecutive rainy days, a straightjacket… I threw such a spectacular tantrum, Jason threatened me with timeout and Coco looked at me with new respect.”

– “I was so tired that I kept losing the book… so I stuck little post-it note reminders all over the house like someone with Alzheimer’s. But Coco wouldn’t follow them. It seemed she couldn’t read and this was most inconvenient… ‘The book says “put the drowsy baby in the cot”. But I don’t HAVE a drowsy baby. I have a screaming baby and THE FUCKING BOOK DOESN’T MENTION WHAT TO DO WITH ONE OF THOSE.’”

– “With one hand I tossed the pills into my mouth and with the other I undid the lid of the bottle and washed them down with two big gulps of breast milk. It was still warm. Clearly, this is known as having it all…”

– “Dear Lord, what is happening to me? I am not that person. I am not someone who talks about poo. I am not the woman in labour who is out of control. Oh wait, I am.”

– “By the time Coco was seven months old, I’d had mastitis six times…

‘Babe, maybe you should think about giving up breastfeeding,’ Jason ventured carefully one day when Coco was about five months old and he was fetching me my ugg boots to wear in bed because I was shaking with cold under a doona and two blankets in the middle of a thirty-degree day.

Strangely, stupidly, I had breastfeeding blindness which allowed me to ignore the fact it was making me terribly ill and taking a toll on my whole family. Not to mention the glaringly obvious: I was repeatedly subjecting Coco to the antibiotics via my breast milk. Doctors swore it was safe but they admitted that some of the medication was indeed being ingested by her. Why was I being so wilfully ignorant about the fact that this was surely doing more harm to her than any good that could come from the breast milk itself?”

– “At least I’m not vomiting into garbage bins behind my desk like another friend who is in the early stages and is trying to hide her pregnancy from workmates.”

I caught myself audibly laughing on public transport when reading this, so here are some quotes I prepared earlier to prime you for the hilarity:

– “When the plastic packaging burst, the condom slid on its lubricant across the page and onto Wendy’s face. Just another day at the office”.

– “Hey, I love animals… Animals won’t fuck me over like the magazine industry.”

– “It was big fun. The kind of fun when you laugh so hard you think you might wee in your pants and, if you’ve ever given birth, sometimes do.”

– “Since my late teens, I’ve tried a bunch of different pills and they’ve all been hugely effective in preventing pregnancy because they turned me into a stark raving loon who was so hideous, no guy wanted to be near me.”

– “All you really need to turn on your partner when you’re trying to conceive is to wave a thermometer around… and shriek like fishwife: ‘Fucking hurry up will you! I’m OVULATING!’”

– “I am calm through all this because apart from being pain-free, I am hooked up to a foetal heart-rate monitor. Nothing makes me happier in the world than being hooked up to machines for reassurance purposes.”

And my absolute favourite quote from the book:

– “Comfortable? COMFORTABLE? What part of having the pain equivalent of a rocking chair shoved up your arse might be COMFORTABLE…?… Thankfully, the two lovely Panadol have taken away all my pain so I’m feeling fantastic. No, wait. The Panadol doesn’t even touch the sides because I AM IN GODDAMN LABOUR AND PANADOL IS FOR PISSY LITTLE HEADACHES!”