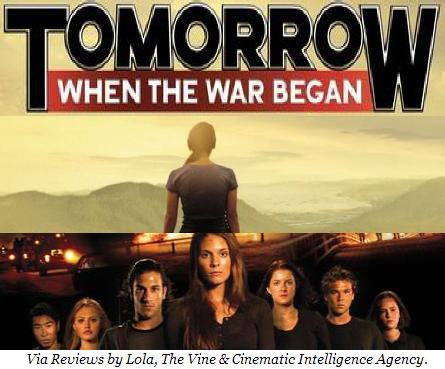 At the risk of sounding bogan-esque, I recently read the first book in John Marsden’s Tomorrow series, Tomorrow, When the War Began, in anticipation of the movie version.

While a lot of my peers read the books as part of their school curriculum, I never did, but after seeing the trailer during New Moon, I was intrigued to say the least.

For a young adult book, it was really good. I loved the suspense Marsden created, and I felt it was very true to the way Australian teenagers talk and act.

For those of you who haven’t read the book or seen the film, I won’t spoil the ending, but I raced to finish the last couple of chapters last Wednesday before I went to see it that night. I wasn’t planning on reading the whole series because I just don’t have time, but once you get to the end of book one, it’s impossible not continue on to book two.

Reading the book and seeing the movie within hours of each other, it’s hard to reconcile what happened in each, respectively. But I loved that the film stayed almost completely true to the book, with the exception of Flip, Kevin’s dog, staying with the gang as they attempted to take back their country, the exclusion of the Hermit in Hell and, *spoiler alert*, a certain religious member of the team who refused to kill anyone shooting up the soldiers at the very end.

I was pleasantly surprised by the book, and if I can say just one thing about the movie, it’s this cliché little ditty: if you see only one movie this year, make it Tomorrow, When the War Began.

Bragging right: My cousin and housemate went to acting school with Deniz Akdeniz, who plays Homer.

4 thoughts on “Movie/Book Review: Tomorrow, When the War Began by John Marsden.”