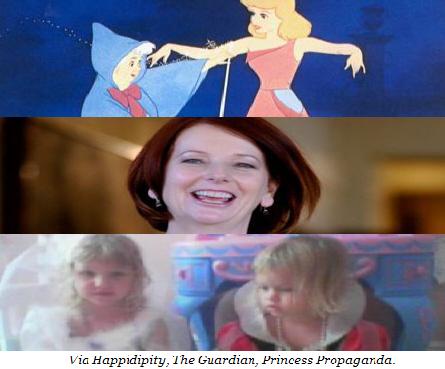 In an article about Disney Princesses and the effect they have on young girls, this paragraph really resonated with me:

“The princess as superhero is not irrelevant. Some scholars I spoke with say that given its post-9/11 timing, princess mania is a response to a newly dangerous world. ‘Historically, princess worship has emerged during periods of uncertainty and profound social change,’ observes Miriam Forman-Brunell, a historian at the University of Missouri-Kansas City.

“‘The original folk tales themselves,’ Forman-Brunell says, ‘spring from medieval and early modern European culture that faced all kinds of economic and demographic and social upheaval—famine, war, disease, terror of wolves. Girls play savoir during times of economic crisis and instability.’ That’s a heavy burden for little shoulders. Perhaps that’s why the magic wand has become an essential part of the princess get-up. In the original stories—even the Disney versions of them—it’s not the girl herself who’s magic; it’s the fairy godmother…”

While we may not be in times of “economic and demographic and social upheaval”—rather, we’re just emerging from them—Prime Minister Julia Gillard has certainly taken the reigns of our country and is steering it in a new direction.

Some of her policies (namely the outmoded same-sex marriage ban) I don’t agree with, but she is certainly a beacon of aspiration for young Australian girls, who now realise they could “end up becoming lawyers, doctors, mothers or princesses…”—or Prime Minister.

In that way, Gillard surely is a feminist fairy godmother for us all.