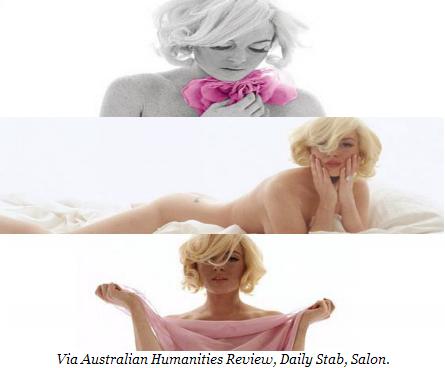 In an academic article by Melissa Hardie, published in The Australian Humanities Review and entitled “The Closet Remediated: Inside Lindsay Lohan”, Lohan’s obsession with the tragic Marilyn Monroe is dissected, noting a certain depth that both actresses shared, but is not necessarily visible to the naked eye. And speaking of naked, the article focuses heavily on Lohan’s rendition of Monroe’s final photo shoot, in which they both get naked with scarves and faux flowers. Hardie writes:

“Bert Stern, the photographer of the Monroe session, took the photos of Lindsay impersonating Monroe, and in the article that accompanies the photo shoot Amanda Fortini writes:

“‘Stern, who shot the photos on film rather than digitally, told me he was interested in Lohan because he suspected “she had a lot more depth to her” than one might assume from “those teenage movies”…’

“Fortini writes of the original pictures of Monroe that ‘Stern excavated and preserved the poignant humanity of the real woman—beautiful, but also fragile, needy, flawed—from the monumental sex symbol’, and Stern’s comments about Lohan employ similar metaphors, where the nude celebrity portrait becomes ironically… the opportunity to decipher depth. Reinforcing Stern’s interest in Monroe’s visible depth—that she might be ‘more’ than her image—is Fortini’s discussion of Lohan’s fascination with Monroe. For Fortini, Lohan’s interest in Monroe

“took root a decade ago with multiple viewings of Niagara during the London filming of The Parent Trap. She has even purchased an apartment where Marilyn once lived. ‘If you saw my house… I have a lot of Marilyn stuff,’ she told me, including a huge painting of Monroe.

“‘It’s eerie,’ Lohan said of the painting, a Christmas gift, ‘because it’s this picture of her, and it’s kind of cartoony, and there’s a big bottle of pills next to her, and they’ve fallen over.’

“Lohan’s fetishistic collection of Monroe’s ‘stuff’ suggests her desire to see beyond, or at least compensate for, deathly (‘cartoony’) images of her celebrated subjectivity. Fortini describes Lohan’s work on the shoot as a form of ‘strict mimesis: scarves, nudity, and all’.”

3 thoughts on “Lindsay Lohan: Marilyn, Eat Your Heart Out.”