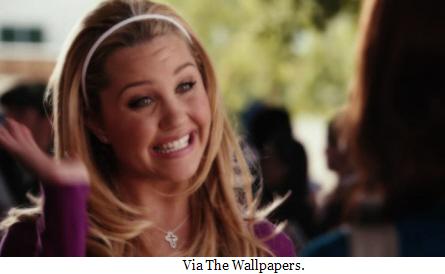 From “Sexist Beatdown: Revenge of The Smiler Edition” by Sady Stein on Tiger Beatdown:

“In adolescence, no-one is normal. That’s why it’s adolescence, for fuck’s sake. The girl who can pull off ‘normal’ the most convincingly is usually the girl who’s best at lying. And all too often, she is The Smiler. The Smiler is nice. The Smiler is pretty. The Smiler is popular, but not too popular; she’s just normal folks, you know? The Smiler is good in school and her teachers love her, but she’s not the valedictorian. The Smiler is in show choir and is cast in all the theatre productions, and she makes sure of her position by purposefully fucking with people’s heads and making them cry during auditions with ‘helpful advice’ about how nobody likes them and they should leave to make people happy, but she’s smiling. (Actual true story.) The Smiler is a respected youth group leader, a pillar of her community, and she tells the girl who’s been abused by her boyfriend that it wouldn’t have happened if she hadn’t presented herself so provocatively, but she promises that Jesus can make it better, and she’s smiling. (Also actual true story.) Sometimes, the Smiler is so good at what she does that the Smiler is your friend: Talk to the Smiler! Hang out with the Smiler! The Smiler only wants to help! Tell the Smiler your troubles—your many secret troubles that no-one knows about because you’d prefer to keep them private! But surely you can trust the Smiler? Except that two weeks later, everybody somehow knows a distorted Grand Guignol disastrous version of exactly what you told the Smiler, and your life is effectively over until college. (I was home-schooled.)

“… What I feel is that I am hanging out with the youth group leader/glee club star/all-around nice girl who also spreads a rumour about how you went to third base with Derek and are a total skank.”

Sounds a lot like Amanda Bynes’ character in Easy A, don’t you think?

One thought on “Smiling Assassin.”