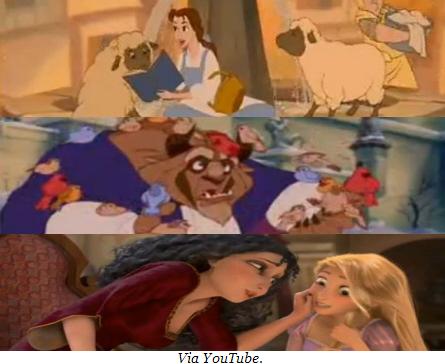 So there’s the vanilla damsels in distress of early Disney films, like Snow White, Sleeping Beauty and Cinderella. And there’s the first independent princess, Belle, “who enjoyed reading and learning, and who lived her life according to her standards”.

But there’s a new kind of three dimensional Disney character, in the form of the villain.

Now, The Beast from Beauty & the Beast isn’t exactly new (he’s pushing 20 years old), but seeing the process the Disney animators went through to create him in Dreams Come True: The Art of Disney’s Classic Fairytales (there’s also some featurettes on the DVD, which has been re-released from the vault) reveals just how complex a character he is.

Incorporating features from a buffalo, bear, gorilla, lion, boar and wolf, but with gentle cows ears, ensures The Beast doesn’t come across as completely horrible.

Both in the exhibition and in the curator’s talk I attended, it was mentioned that despite his ugly exterior, the Beast had to have attributes (both physical—the aforementioned cows ears, and blue eyes—and personality-wise) that a beautiful woman of Belle’s integrity, intelligence and courage could fall in love with. (It could be argued that there are some classic abusive relationship markers in Belle and the Beast’s union, but more to come on that next week.)

Elsewhere, in the upcoming Tangled, which is also featured in Dreams Come True, Mother Gothel, Rapunzel’s keeper, is the movie’s villain. However, she and Rapunzel share a more complicated relationship than that of Snow White and the Evil Queen, Cinderella and her evil stepmother, or Aurora and Maleficent (whose appearance was based on Katharine Hepburn, FYI), in that the animators wanted Mother Gothel to be “believable for Rapunzel to love”. God knows I’ve had my fair share of love-hate with my mother, so I think this movie will be quite relatable in that respect.

Can’t wait to see it in January!

Related: You Can Ring My Belle.

Women in Fiction: Are Our Favourite Female Characters Actually Strong, or Stereotypes?

Elsewhere: [Overthinking It] Why Strong Female Characters Are Bad for Women.

[Overthinking It] Why Weak Male Characters Are Bad for Women.

2 thoughts on “Attack of the Three-Dimensional Disney Character.”