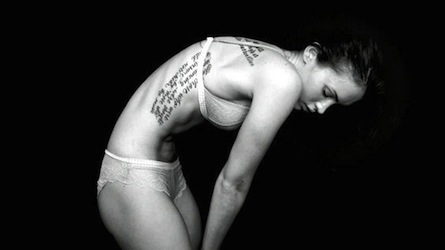 “… You have a picture of said body—made even thinner through creative posing—that’s used to sell underwear. In other words, she is paid to be thin. Period. All the talk about her abs and her weight-training regimen don’t have anything to do with the reality: Her body is her business. Literally. It’s her business, not ours, whether she’s healthy—that’s between Ms. Fox and her doctor. And it’s her business—an integral part of her financial strategy—to be thin.”

This is a superb, graphic and thought-provoking piece of writing on waxing, vaginoplasty and the ubiquity of female lady-parts. Semi-NSFW, but I recommend reading it at any cost:

“… while we can look over with horror at a tribe of women who claim that if their five-year-old happened to bleed excessively after having her clitoris cut off, that she must have been a witch, here in our own backyard, we give it some fancy name like vaginoplasty and somehow it’s less archaic? Goodness, we’re so civilized.”

Bern Morley on song lyrics and what we let our children listen to. Good stuff.

The double standards of cheating. FYI, I don’t agree with them.

Anti-Semitism in the fashion house of Christian Dior goes further back than just John Galliano’s comments.

James Franco was a jerk to Kristina Wong. I think he’s a jerk in general.

CNN recently published an article asking if “whites are racially oppressed?” That’s like saying there needs to be an international men’s day if there’s a women’s one. Seriously, someone tried to argue that to me last week!

Charlie Sheen and “The Disposable Woman”.

Thanks for the shoutout, Beauty Redefined.

“But is it the responsibility of the media to be the moral gatekeepers of what we should and shouldn’t know about? Is it their responsibility to diagnose supposed ‘mental illness’ and on that basis, stop reporting on certain stories?

“… If drug addled celebrities on the front pages didn’t sell, they wouldn’t be there. So is the problem us? Just who is egging on who[m] here?”

Alissa Warren is a bit unsure if Waity Kaity is the royal for her.