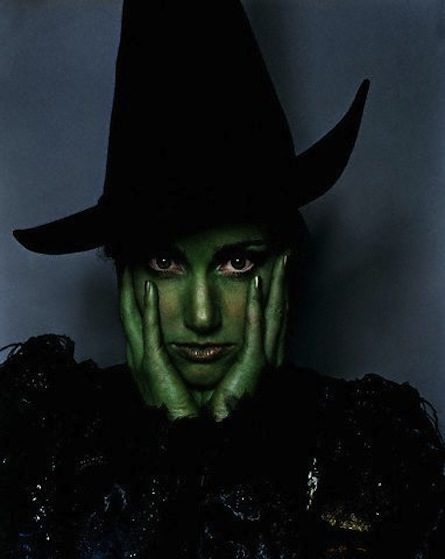 From “The Theme of Good VS. Evil” in Wicked: The Life & Times of the Wicked Witch of the West on Shmoop:

“Good vs. evil really is the ultimate (and original) theme of Wicked. But the twist is that the theme doesn’t focus on a showdown between a hero and a super-villain. Rather, the focus is on good and evil residing within the same person (which Nietzsche would probably approve of). No one is simply good or evil here. Not surprisingly, evil often trumps good in the book. Or at least a philosophical concern with evil gets the spotlight more often than any musings on goodness. The book is about a Witch after all.

“Ultimately, neither good nor evil is clearly defined or clearly separated here, which may be precisely the point. If the people and places of Wicked are not black and white, why should huge concepts like good and evil be anything other than hard to grasp and gray [Scarlett Woman note: or rather, green]? Goodness is seen as something elusive or hard to find, while evil is depicted as much more complex than a cackling green witch in a pointy black hat. In the end, evil may be nothing more than the absence of something else: awareness, constraint, goodness. Goodness requires intent and consciousness, but evil can be done subconsciously and even unwillingly; it’s a sort of default setting in people, witches or not.”

Strong Female Characters in the Land of Oz.

The Wizard of Oz VS. Wicked.

Women in Fiction: Are Our Favourite Fictional Females Actually Strong, or Stereotypes?

“With a Gun Between Her Legs” Take 2.

“With a Gun Between Her Legs”: Why “Strong” (AKA “Sexy” Whilst Being “Strong”) Female Characters Are Bad For Women.

Elsewhere: [Shmoop] The Theme of Good VS. Evil in Wicked: The Life & Times of the Wicked Witch of the West.