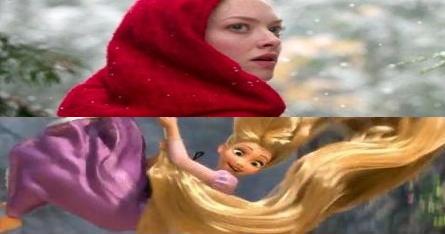 From “Cinderella Fights Back” by Kate Forsyth on MamaMia:

“The original Little Red Riding Hood, for example, was a peasant girl who escapes the wolf due entirely to her own cleverness. It was Charles Perrault who gave her a red cap—symbolic of passion and blood—and made the tale a cautionary one in which the heroine is gobbled up by the wolf. It was the Grimm Brothers who brought in a male hunter to save her, making her seem like a twit.

“The original Rapunzel—named ‘Persinette’ in a 1696 tale by French writer Charlotte-Rose de Caumont de la Force—was the daughter of poor people, so hungry they steal a handful of parsley from a witch. They are forced to give up their child or face the death penalty. Locked away in solitary confinement in a tower, Persinette sings so beautifully she causes the prince to fall in love with her. Persinette has sex with him, plots with him to escape and, in the end, gives birth to twins, saves the prince with her healing tears, and persuades the witch to relent. The Grimm Brothers’ retelling made her into such a meek little idiot that the psychological term ‘Rapunzel syndrome’ was coined to describe a woman who waits passively to be rescued.

“Fairy tales work because they speak in metaphor, archetype, and symbol. They contain within them all of our deepest fears and deepest desires. Don’t deny your children the thrill and danger and power of a good fairy tale; just pick the right ones to tell them. One in which the heroine is brave, bright, kind, resourceful, and saves both herself and others.”