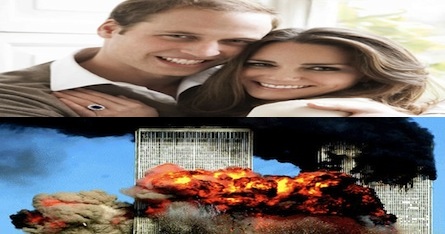 Today is Friday (Friday, everybody’s looking forward to the weekend…), 29th April, and you all know what that means: it’s the Royal Wedding, y’all!

Granted, I couldn’t care less, but I will be spending the evening on the couch with some books and mags, tuning in every now and then to check on the festivities (namely Kate’s Her Royal Highness Princess Catherine’s dress and to perve on Prince Harry).

(I also have a special event of my own occurring today that takes excitement precedence, and that is getting my first tattoo!)

But with an expected audience of 2 billion people, is this the event of the decade?

It hasn’t quite been ten years since September 11, so is it possible that the Royal Wedding could take the terrorist attack’s place as the most significant event in the past decade? (On that note, what about Japan’s earthquake, tsunami and nuclear crisis?)

It’s hard to compare the two: one was one of the most horrific events in human history that changed the way we think, act and feel, the other is an exercise in royal extravagance and tabloid obsession.

2001 to 2011 will be book ended by the saddest and happiest televised moments.

How will you be spending the day?

7 thoughts on “The Royal Wedding—The Other Event of the Decade?”