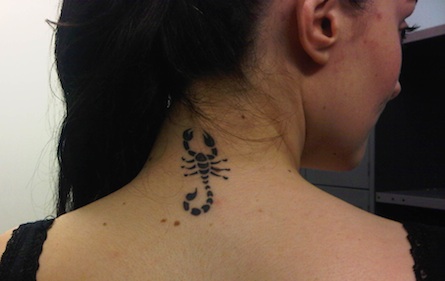 Most of my friends have seen my tattoo by now; if not, there’s a pic above.

I love it, I’d been wanting it for about seven years, and it’s in a place I can’t see, so I’m not likely to get sick of it. If I do, there’s always laser removal, right…? ;)

The other night I was out dancing, celebrating a friend’s birthday. I was wearing one of my favourite dresses, from By Johnny, which is a LBD with cut outs around the chest/breast area. I usually wear my hair “in a prim and proper bun” with this dress, so as to avoid looking slutty (as per a Facebook status the night I debuted the dress at another friend’s birthday. I’m 90% sure I’ll be wearing it to SlutWalk, too [stay tuned for more on this tomorrow]). As daring as the outfit is, I always get compliments when I wear it, of the “you look really classy” variety, so go figure.

But this dress and the accompanying hairstyle allows my tattoo to be fully visible, and apparently, it really attracts the opposite sex.

Men love to touch it. I don’t have a problem with my guy friends touching it or asking to see it, but when random strangers on the dance floor just reach out and poke it, you could imagine I’m not such a fan.

Since when does having a tattoo make you public property? If it was on my ass, would people be touching it then? No, because that would be sexual harassment.

But this is something pregnant women, or people with injuries, young children (and not-so-young children, depending on if your mother is very overbearing, or you’ve got long lost relatives who haven’t seen you in a while) and probably people with all manner of curious novelties adorning their bodies endure, whether they wish to or not.

It would be another, somewhat welcome, thing if someone just tapped me on the shoulder and told me they liked my tattoo. But I don’t take well to being poked and prodded when I’m trying to have fun with my friends.

It’s only happened twice (granted, in the space of a couple of hours), and it’s sure as hell not enough to make me wish I hadn’t gotten it, but having a tattoo, or a shaved head, or a baby growing inside of you, is not an invitation for the unwashed masses to touch you!

12 thoughts on “So a Tattoo Makes Me Public Property, Huh?”