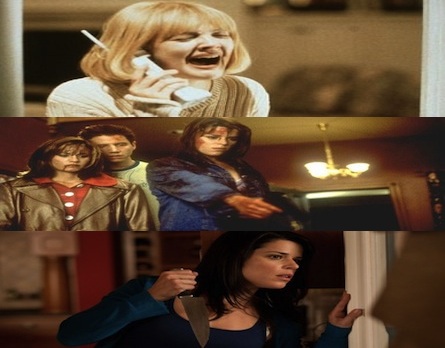 Scream 4 marked the most recent installment of the horror franchise, which ended in much the same similar way as the past three chapters.

The killer comes back from the dead, gun-wielding Gale Weathers fires a bullet and central scream queen Sidney Prescott gets the last laugh, with fellow original Woodsboro survivor Dewey fumbling around on the sidelines.

Fifteen years after the original, it is still unbelievable as to how Dewey is on the police force, Gale is still a ball-busting rogue sleuth, albeit with a lot more Botox than the last time we saw her, and Sidney has finally wiped that weepy-eyed look off her face and is kicking ass and taking names.

In the first instalment, Sidney is an ineffectual twit who berates horror movie starlets for “running up the stairs when they should be going out the front door” when, only moments later, she does exactly the same thing!

But as I watched each movie, I slowly started to root for Sid. Not only was she dealing with the fallout of her mother’s death and the wrongful allegation against Cotton Weary for the crime in the first film, but she was also dealing with a rat of a boyfriend, Billy, friends, high school and trying not to crumble under the pressure of it all. So I’ll cut her a break.

In the second film, Sidney undergoes remarkable growth due, in part, to going off to college, but the audience can see in the way Sidney carries herself that she believes the murders are over. Oh, how wrong she was! I especially love the final scene in Scream 2, with Sidney outsmarting (one of) the killer(s), Mrs. Loomis, with the help of Cotton. Gale’s there, too, holding on til the bitter end.

The Scream franchise, after all, is about the women. It could be argued that most horror movies are about the women; female victims make for easy targets and garner more of a reaction from the audience. But Scream was one of the first mainstream horrors to advocate for equal-opportunity killing: where the men are as fair game as the girls, and two out of the seven killers have been women. More than that, they’ve been the masterminds of the whole operation; using the clueless and fame-hungry men as pawns in their bloody chess game.

Traditional horror operates on the premise that “she alone looks death in the face”. Not Scream, though.

Ashley Smith in “Final Girl(s) Power: Scream”, writes of not only Sidney, but Gale and Dewey, staring death in the face:

“The success of the narrative is predicated now on not an individual woman, extraordinary and significantly boyish, but on the cooperation of two women who together stab, shoot and electrocute the two killers into oblivion. This moment is also notable because it is one of the many instances in Scream that utilizes very self-referential language, not only does it rework the figure of the Final Girl, it talks about itself reworking the figure of the Final Girl. This moment is an example of how the film explicitly works on behalf of the female spectator. Sydney/Campbell is speaking for and speaking as one of the girls in the horror audience who want to see active female characters fighting for each other, and significantly not even bound by a sentimentalised friendship.”

Sidney and Gale start out as sworn enemies (as murdered bestie Tatum Riley says after Sidney punches Gale: “‘I’ll send you a copy.’ Bam! Bitch went down! Sid: super bitch! You’re so cool!”), but I suppose bonding over the murders of pretty much everyone you know will solidify your connection, whether or not it’s one of mutual affection for each other, or mutual hatred for the killer(s).

And then there’s Dewey. He’s a funny character and David Arquette plays him to perfection, but the sum of his survival involves him always arriving to the party 10 seconds late and missing all the action. Sure, he’s been stabbed a few times, but he’s more of the token surviving male than a fully well-rounded character. As Smith writes, “the text allows for powerful and active female figures [that] it compensates [for] with weak, ineffective male ones”.

Before Scream, to survive as a “final girl” you had to be a virgin. This works well for high school victims, as a lot of high school students are virgins. And hey, this is the movies, so so what if it doesn’t reflect real life?

The first Scream begins with Sidney as a virgin, but in the height of the killings, she throws caution her virginity to the wind and has sex with Billy. In any other horror film, this would mean she dies. (Casey Becker, Drew Barrymore’s character, and her boyfriend, Steve, die in the opening scene, as does Tatum, girlfriend of Stu, later on in the movie in the doggy-door scene, above. You might imagine these kids to be non-virgins, as they’re in seemingly committed, loving relationships, but this is never directly addressed.) But Scream, being the “meta-text” that it is, takes a page out of Buffy’s book, and the non-virgin fights to live another day.

But the exemplar of a strong female character in Scream is Gale. She’s not only a ball-busting, high-powered tabloid journalist who fights to see an innocent man go free but, as I mentioned above, she’s always the last one standing, alongside reluctant partner-in-crime Sidney.

In Scream 4, she’s a struggling stay-at-home novelist with writer’s block, so when Sidney—and the subsequent murders—return to Woodsboro, she jumps at the chance to help with the investigations. Dewey, and his lovesick underling Deputy Judy, don’t want her interfering with the case, so Gale goes rogue.

It is Gale who uncovers most of the developments in the case, including who the killer is. And, according to Melissa Lafsky at The Awl, she’s breaking a lot of other ground, too :

“She [Courteney Cox] slashes her way out of the 40-something female stereotype, and takes over this movie with a flick of her scorn-ready… brow. Let’s face it: Few film archetypes are more brutal than the ‘older woman in a horror movie’—either you’re the psycho nutcase… or you’re the pathetic victim… And no matter what, you’re ALWAYS an obsessive mother.

“Cox pulls off a pretty impressive coup, upstaging not only the cute flouncing teens, but also her 15-years-younger self. Her character—now successful, childless(!), and utterly bored with the ‘middle-aged wife’ role—shrugs off all orders to ‘stay out of it’ and leaps back into the murderous fray, husbands, younger blondes and kitchen knives be damned. She takes nothing for granted, and thinks not a second about sneaking into dark corners to catch homicidal fruitcakes (and bitch is 47!!!). While Arquette and Campbell slide into their ’90s cliché groove, Cox reinvents and one-ups, kicking this meta-fest to life and providing the only sexy thing onscreen, gelatinous lips and all. Gale Weathers is shrewd, aggressive, cunning, but never heartless; despite it all, she still loves that stupefied ass clown Dewey. And she does it all while sporting a better ass than the 20-somethings. And… she doesn’t even have to die for it!”

7 thoughts on “I Scream, You Scream, We All Scream for Feminism!”