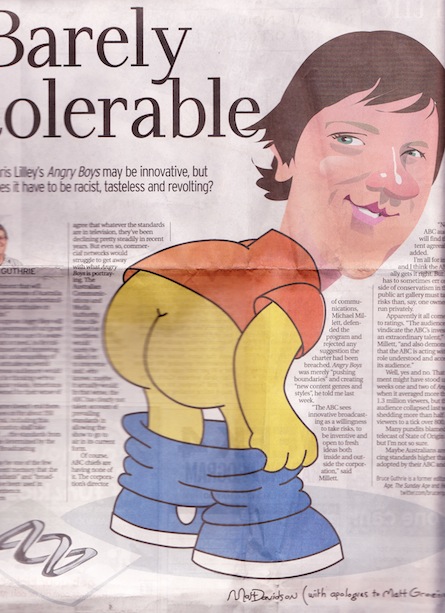 I was pleasantly surprised to see an article on Chris Lilley’s Angry Boys juxtaposed against one on the SlutWalk in The Sunday Age’s Opinion columns this past weekend.

What I wasn’t so pleasantly surprised to find was that they were both championing the censorship of a show “many critics and some intellectuals have applauded… for [its] brave comedy” and of women’s rights to wear what we want when we want where we want without the risk of sexual assault.

On that, Nicole Brady, author of “It Makes Sense to Be Aware of What You Wear” actually sides with the Toronto policeman, Michael Sanguinetti, writing, “The word ‘slut’ was probably overkill, but that policeman was onto something… Boiled down, and stripped of the inflammatory ‘slut’, his argument was ‘be careful about what you wear’. Advice as dull as your mother telling you to wear a coat on a cold morning.”

I don’t want to go into why what the cop said was wrong and why Brady’s likening of “not dressing like a slut” to wearing “a coat on a dull morning” is an archaic way of thinking (for that, you can go here).

In the article to the left of Brady’s, Bruce Guthrie continues in his argument against the ABC/HBO partnership, saying that the ABC’s charter may be in conflict with the success of and American market for the show. “I’m not sure if the cable network has a charter, but if it did it would probably say this: ‘Our goal is to make as much money from our programming as possible’,” he writes. Guthrie specifically takes issue with Lilley’s portrayal of rapper S.Mouse, a role for which the actor and creator appears in blackface. “Why is it okay for Lilley to wear blackface, but the guys from Hey, Hey, It’s Saturday are vilified for it?” I’ve heard it asked.

Unlike Brady’s, I can see Guthrie’s point. I think Angry Boys has a lot of potential, and it is damn funny, but I feel that it has gone a bit downhill from the first episode, which focused heavily on the Sims twins, Daniel and Nathan, and their Gran’s workplace, a juvenile detention centre, to last week’s third, which “explained—and showed, needlessly and graphically—how surfer Blake Oldfield became a eunuch.”

But it does portray Australian “bogan” life to a tee, and I think if the show focused a bit more on the juvenile detention centre, and the classism and racism that surrounds it, Angry Boys would not only be a funny show, it would also be an apt dialogue on Australian society.