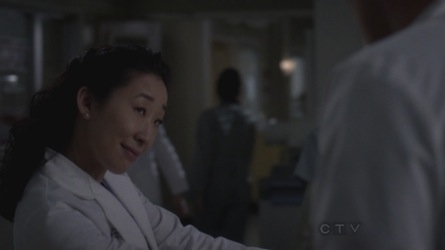 When it comes to “likeable” female characters on TV, you might think of Buffy Summers. Or Rachel Green. Or the Gilmore girls. But Grey’s Anatomy’s Cristina Yang probably isn’t one of them.

She’s abrasive, unfeeling, career-driven, ruthless and selfish. Everything a woman shouldn’t be, according to patriarchal norms.

Perhaps she could be more like the ousted Izzie Stevens, who was bubbly and sexy and baked cookies. Or the virginal and highly-strung April Kempner, whom Cristina praises for having “virgin super powers”, enabling her to be super-organised.

But I like Cristina just the way she is. She’s got her eye on the prize, won’t compromise her personal beliefs or goals to be liked or for a man, and she’s got “tiny little genius” hands that enable her to roll with the big guns.

This is why Cristina Yang is one of the only “feminist”—or “strong female”—characters on television. Nay, in all of fiction.

For one thing, she refuses to rely on her looks or her feminine wiles to get ahead. In “This is How We Do It” in season seven, she rejects Owen’s compliment about her beauty, saying, “If you want to appease me, compliment my brain.” (Stay tuned for more on beauty versus brains this week.)

And in last week’s final, we saw Cristina exercise her right to choose, and schedule her second abortion on the show, after much (mostly solo) deliberation. While excluding the opinion of her significant other and father of the future child wasn’t the most respectful thing to do, ultimately it came down to her choice, and she chose to terminate the pregnancy.

In season two, Cristina divulges that she’s pregnant to Dr. Burke and, again, makes the decision to get an abortion on her own. Whereas a character like Izzie seems to serve the pro-life agenda (she gave up her own baby for adoption when she was a teenager growing up in a trailer park, and convinced a HIV-positive woman to carry her pregnancy to term), Cristina resists the societal pressures to tap into her maternal instincts and give birth to a child she does not want.

Regardless of whose agenda could be seen as being served by Cristina’s character, she acts without fear of what other people will think of her.

As a person, no matter what gender, it is seemingly second nature to want others to like us, and to portray our best selves to them. Just look at the ritual of the date or the job interview. That Cristina defies this action (though we have seen her star struck when meeting surgeons like Tom Evans, and Preston Burke for the first time) makes her not just a feminist character, but a truly humanist one.

There are people in this world who challenge us, grate on us, and whom we genuinely don’t like or approve of. But that’s what makes the world go around. Cristina Yang being one of these kinds of people, and being portrayed to us as a whole person on television, with hopes and dreams and trials and tribulations and relationships and a career and no desire for children, and not just as the bitchy mother-in-law who lives off her husband’s money and needs a good fuck, is truly a sight to behold.

Sookie as Feminist? Hear Her Roar.

Are Our Favourite Fictional Females Actually Strong, or Stereotypes?

Elsewhere: [The Feel of Free] Cristina Yang + You Can’t Compromise on a Baby.

Image via Home of the Nutty.