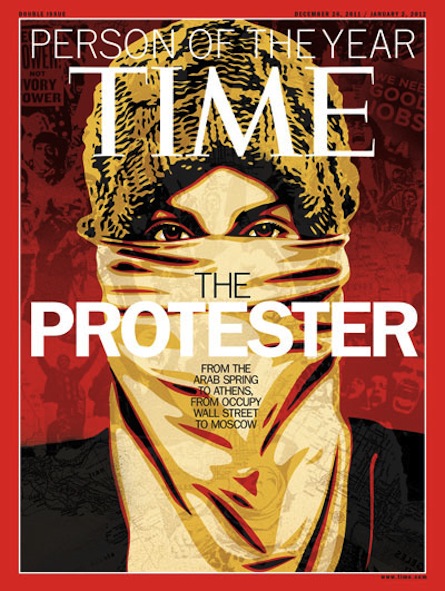 It’s been a couple of weeks since Time’s Person of the Year issue came out and it, along with the majority of 2011, was all about The Protester.

The Arab Spring, Occupy and SlutWalk took centre stage in news stories across the world throughout 2011, however Time chose to focus on just the former two, with only one small mention of SlutWalk’s Toronto origins on page 52, “The Protest Network”.

While SlutWalk may not have inspired as much change as The Arab Spring did (it remains to be seen how influential Occupy can be, but it seems like it’s been making headlines for sexual assault and police brutality rather than any real change on Wall Street and amongst the world’s 1%), it was still certainly headline making and, personally, greatly affecting.

Occupy has no real vision nor authority in charge to determine what is to eventuate from the protest, while each SlutWalk was pretty well organised and had a clear expected outcome, whether that was reclaiming the word slut, ending victim-blaming, or simply raising awareness that what a woman was wearing when she was sexually assaulted or harassed has no bearing on why she was targeted.

Call me biased, but I think SlutWalk should have had a more prominent position in Time’s protester issue.

Elsewhere: [Time] People Who Mattered in 2011: The Protester.