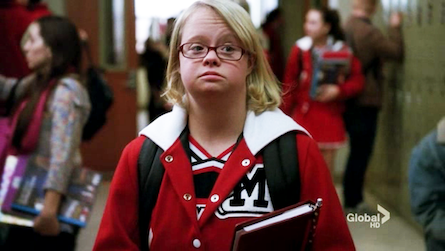 Wow, where do I start? Last night’s episode of Glee focusing on Becky’s newfound interest in Artie and Mr. Shue asking Emma to marry him was one of the most offensive yet.

Let’s begin with Becky: I found it weird that Becky’s internal monologue was spoken in a British accent (Helen Mirren’s to be exact). She claims that it’s her head and she can sound however she wants, but how many “abled” characters have a different voice in their heads and make that justification for it? I though it was singling Becky out because of her disability.

She and Artie go on a date and, at first, Artie feels uncomfortable with it, but begins to get to know and like Becky. It came across as platonic on Artie’s end, but his fellow glee clubbers gave him the third degree about what kind of message he was giving Becky.

They urged him not to lead Becky on or give her the wrong idea, and Artie called them out on their hypocritical ways: “You guys talk a good game” about acceptance, but at the end of the day, they’re just as narrow minded as the rest of McKinley High, which pretty much sums up Glee. They think just because they’ve got black and Asian characters and characters in wheelchairs and with Down’s syndrome and characters who are gay they’re being “inclusive”, but really, they show is just using them as token gestures.

Take Kurt, for example: he hasn’t been the focus of many storylines of late, and the writers seem to just slot him in to the background. In the opening scene, Mercedes and Sam channel Sandy and Danny of Grease, while the rest of the glee club stand around imploring them to “tell me more, tell me more”. Kurt belongs to the girls’ group in this instance while his equally gay boyfriend, Blaine, is hanging with the boys on the bleachers. Furthermore, when Puck, Finn and Blaine act as backup singers to Artie, Will and Mike in their rendition of “Moves Like Jagger”, mashed up with “Jumpin’ Jack Flash”, Kurt is nowhere to be seen. Is it because he’s not sexy or masculine enough? Let’s remember that this isn’t the first time Glee has ostracised Kurt from the gender group he belongs to because of his sexuality. Didn’t Glee get the memo: gender and sexuality are not the same thing.

But back to Becky: when Artie takes into consideration what the rest of New Directions are trying to tell him, he asks Coach Sue, of all people, for advice.

It is revealed that Becky sent Artie a sexy photo and he feels weird about it. Sue asks if he felt the same when Brittany, no doubt, sent him similar pictures of herself. Artie replies no, but those were different circumstances. So even Artie, a man with disabilities himself, thinks someone with Down’s can’t be sexy. Hypocritical, much?

The other storyline driving this episode is Will and Emma’s relationship being taken to the next level in the form of marriage. Emma is so desperate for Will to propose that she fantasises about doing it herself. Funnily enough, Coach Beiste and Sue become her bridesmaids in the dream sequence, wearing Princess Eugenie and Beatrice’s royal wedding hats, respectively. They called Kate Middleton “Waity Katie” and I think that’s what the writers were playing into with Emma’s patient wait for Will to propose.

Will finally decides to propose and asks Finn to be his best man as apparently he has no grown up friends and because he thinks Finn has showed him what it means to be a good man. Pah!

Finn is the whiniest, most cowardly and simpering character on the show! He feels sorry for himself, has an unrealistic idea of what Rachel and women in general should be, is (or has been) embarrassed by Kurt’s sexuality and only stands up for those he loves after the fact. He also thinks that joining the army will fill the void that college football has left and make him more of a man.

To further illustrate Finn’s insecurity, he decides to ask Rachel to marry him because he’s got nothing else going for him!

I was also a bit disturbed by Sam’s inclusion in the synchronised swimming team, called the “Guppies” and lead by bronze Olympic medalist, Roz Washington, who is of African American descent. She also comments that Sam’s “trouty mouth” is one she’s never seen on a white kid. This, in addition to Becky’s dig at the possibility of dating Mike Chang (“I’m no rice queen”), makes “Yes/No” one of the worst episodes of Glee yet.

Image via The Dam Nation.

7 thoughts on “TV: The Underlying Message in Glee’s “Yes/No” Episode.”