We’ve come to learn that when Glee devotes a whole episode to a star (Madonna, Britney Spears)—bar the second Lady Gaga episode—they pretty much go the Rock of Ages route: pack as many songs into the episode as they can without giving much thought to the dismal story lines developed in previous episodes.

I thought, in their “Michael” episode, they went the other way: using whichever Michael Jackson songs they had access to that resembled the character’s plotlines to insert into the show. Unfortunately, this meant such dull MJ songs as “I Just Can’t Stop Loving You” and “Ben.”

Rachel Berry is included in both of these renditions, and she admits at the beginning of the episode that she’s never really “gotten” what Michael Jackson is all about like the other New Directions’ have.

It seems the Glee writers don’t really “get” him, either (although, do they really “get” anything?), because they would have used songs like “I Want You Back”, when Sam serenades Mercedes, instead of “Human Nature” (which is a stunning song and perhaps the only example of where the writers chose melody over meaning); and when Artie gets all riled up over Blaine’s rock-salt-infused slushie attack at the hands of the Warblers, “They Don’t Really Care About Us” might have been more appropriate than Michael’s duet with sister Janet, “Scream”:

“What do you expect from us; we’re people. I know the rest of the world may not see us like that but when they tease us and throw stuff at us and toss us in dumpsters and tell us that we’re nothing but losers with stupid dreams it freaking hurts. And we’re supposed to turn the other cheek and be the bigger man by telling ourselves that those dreams and how hard we work make us better than them? But it gets pretty damn hard to feel that way when they always get to win.” 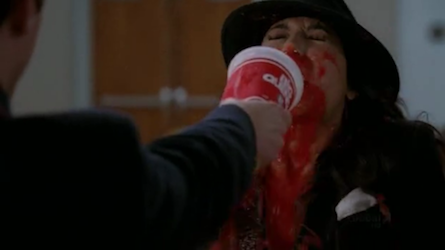 By far the best performance was the Warblers’ Sebastian and Santana’s Michael-off of “Smooth Criminal”, featuring 2 Cellos, who played at Elton John’s gig and did the same version of the song!

And, for old time’s Michael’s sake, here are the other songs from the episode:

The Underlying Message in Glee’s “Born This Way” Episode.

2 thoughts on “TV: Glee “Michael” Review—Oh My God Can’t Believe What I Saw As I Turned On the TV This Evening.”