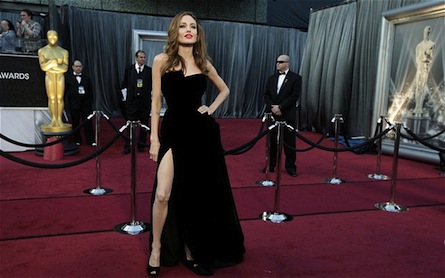 One of my sleazeball colleagues asked me who I thought was the best dressed at the Oscars, pretty much as an excuse to fill me in on his “hot for teacher” J.Lo feelings. Inevitably, the subject of Angelina Jolie and her right leg came up. Some coworkers who joined in the conversation were sure she knew what she was doing. I wagered that if she did, she was probably making a tongue-in-cheek statement about her standing as a sex object. Perhaps that’s just how she felt comfortable (after all, all we heard was how comfortable the black velvet Atelier Versace dress was), or knew she was rocking it and wanted to show off.

Whatever Jolie’s reasoning, apparently she’s “too old” to be showing off her legs like that, according to abovementioned coworker. “It’s not like she’s 16,” he said. No, because if she was sixteen it would be highly inappropriate. “36 is just too old” to be wearing a dress like that. Not only are there some deep-seated pedophilic tendencies coming to light here, but it just reiterates society’s predilection for youth and its sexism. We’ve all heard about that study that says women don’t feel comfortable wearing a miniskirt over the age of 35. Paging Jolie…

Personally, I think my legs are my worst feature, but many women love their legs. They’re one of the only body parts that don’t sag too much with age, and can be bared when tuck shop lady arms and age spots apparently set in. My grandma will be 90 this year and she still maintains her legs are her best feature. Obviously I didn’t inherit varicose veins from her!

And 35 being too old to flash some leg, even if you are one of the world’s sexiest women, is bullocks, indeed!

I think Jolie looked bangin’, if a little staged, and should continue to rock the flesh-baring gowns til the cows come home. You go, girl!

Elsewhere: [MamaMia] 47 is Too Old to be Wearing a Bikini. Oh Bullocks.

Image via The Telegraph.

2 thoughts on “Angelina Jolie’s Right Leg & What it Tells Us About Youth & Beauty.”