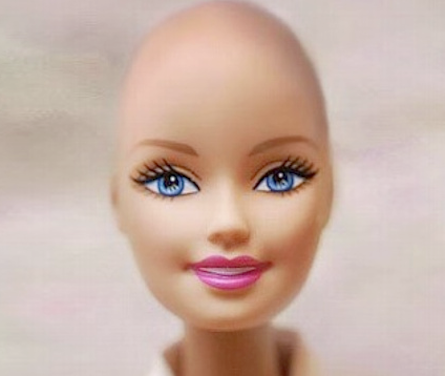 On the one hand, we need to applaud Mattel for accepting an “outside idea” for Bald & Beautiful Barbie, which aims to lessen the stigma of hair loss due to cancer treatment for young girls and their mothers who have the disease.

On the other, it’s not going to actually be Barbie who’s bald, but her bestie. Let’s just hope that this time she’ll be able to get into the Barbie Dream House, unlike the last doll they tried to make in honour of people who don’t fit the able-bodied norm: Share-a-Smile Becky, whose wheelchair didn’t fit inside the Dream House doors. Whoops!

So with this new doll, Mattel might be saying that bald is beautiful, just as long as it’s not Barbie who loses her hair. Baldness is beneath Barbie, don’t you know?

One step forward, two steps back…

One thought on “Bald Barbie—Actually, Barbie Won’t Be Bald At All. Instead, It’ll Be Her Best Friend.”