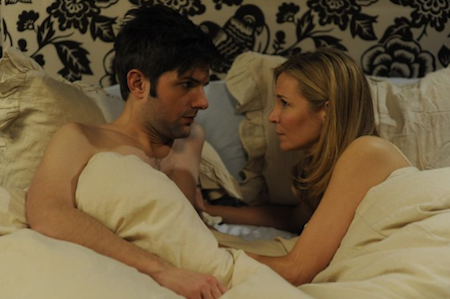 I had high hopes for Friends with Kids. Not knowing much about the premise aside from the fact that the movie centred around two friends who decide to have a baby together without the romantic attachment, and the fact that Megan Fox and the cast of Bridesmaids was in it, I was looking forward to it.

But it failed to live up to the hype I’d created in my mind. Don’t get me wrong, ruminating on it, I thought the characters were real, gritty, likable and infuriating at the same time; much like Bridesmaids. I applaud Jennifer Westfeldt for writing such human characters (she also starred in, produced and directed the flick. Go girl!), but I just couldn’t get behind their motivations.

The story begins with Julie (Westfeldt) and Jason, two besties who see the affect children have on their friends’ marriages, and decide to have a baby together whilst still seeing other people, so they have the best of both worlds. What troubled me about this scenario was that alternative means of baby-having were never discussed. In America, it’s easy (in comparison to other countries, like Australia) to adopt a baby as a well-off, single woman. I can’t imagine it would be hard to add Jason’s name to the birth certificate as the father. Or how about surrogacy? Unbelievably, IVF isn’t discussed at all and Julie and Jason actually have intercourse to conceive their child. A woman of Julie’s age wouldn’t likely get pregnant on the first try, but low and behold, nine months later out pops baby Joe.

For what it’s worth, I think the whole idea of raising a baby with a friend is a great idea! It’s not for me, but who’s to say how they’ll feel when their biological clock is ticking and they’re without a partner? But—inevitably, as the trope goes—hormones and jealously over Megan Fox and Ed Burns, who play Jason and Julie’s lovers, respectively, get in the way, and Julie confesses her love for Jason about a year after Joe’s birth. Jason has just moved in with Fox’s Mary Jane and doesn’t feel the same way. Julie moves out of the apartment building she and Jason both live in (in different apartments) in Manhattan and relocates to Brooklyn, “two trains and a $70 cab fare away”, to escape the pain of seeing him. A year later, Jason comes to the same realisation Julie had—that they’d be perfect together—but Julie’s having none of it. Eventually, she succumbs and they live happily ever after, proving that men and women can’t be friends!

One other pet peeve I had with the movie was the sheer luxury the characters lived in. For a film set in New York, it’s highly unlikely that everyone in a friendship circle would have immaculate rent-controlled apartments they live in alone and dine at “$100 a plate” restaurants (sound like another Manhattan-set story you know…?), especially when Julie’s job is “deciding who to give [a rich man’s] money to”: charity work, essentially. When she laments that she can’t afford to send Joe to a $20,000 a year private school in Manhattan, it really doesn’t mesh with her characters’ story which has, up to then, been a yuppie existence of the abovementioned $70 taxi rides, ski trips and $1400 worth of baby blankets…