Did Glee really need to do another Britney Spears episode? As Artie pointed out, “we’ve scraped the bottom of that Britney barrel” but Britney’s made a comeback as judge on The X Factor broadcast on the same channel as Glee—Fox—so both shows are running with the Britney theme no matter how uninspiring she’s become.

Apparently New Directions “really came into your own during the last Britney week”, according to Mr. Shue, and what he says goes. Coincidentally, Brittany S. Pierce is undergoing a meltdown the same week the glee club resurrects her idol and namesake’s back catalogue. She’s feeling rejected by her long-distance lady love Santana, was kicked off the Cheerios and subsequently lost her high pony. Channeling Britney circa 2008, Brittany says if she can’t have her high pony then she doesn’t want any hair at all, and attempts to shave it off before attacking McKinley High’s resident paparazzo, Jacob Ben Israel, with an umbrella. 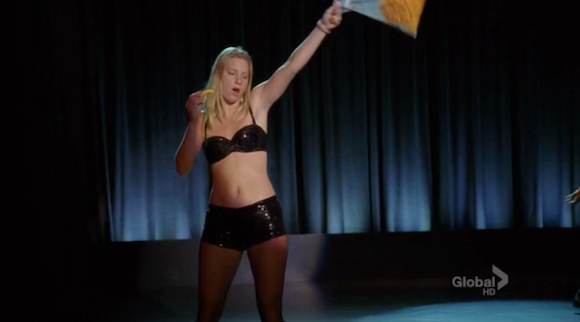 Britney Spears’ tragic life is ripe for the picking—the recent revelation from former paparazzo turned Britney’s manager turned collaborator with Courtney Love on a musical about her and Kurt Cobain’s life together that Britney used to do crystal meth—so much so that Christie Whelan’s turn in Britney Spears: The Cabaret was the exemplar of how to do a Britney satire. Glee’s “Britney 2.0” was not.

The Underlying Message in Glee’s “The Spanish Teacher” Episode.

Glee: The Right & Wrong of It.

“This is a Story About a Girl Named Britney… I Mean Lucky!” Britney Spears: The Cabaret Review.