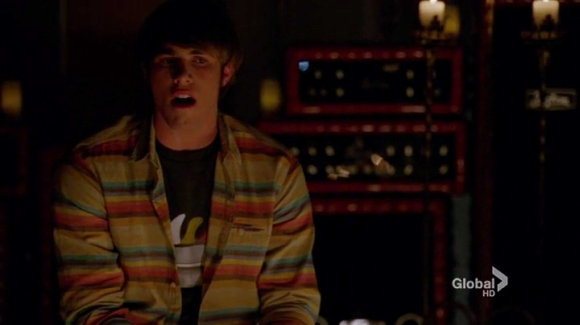 Apparently the episode in which Ryder and Kitty reveal that they were molested as children was made in partnership with RAINN, the Rape, Abuse & Incest Nation Network, although you wouldn’t think it from Sam and Artie’s reaction to Ryder’s confession.

“Some hot 18-year-old played with your junk? I’d kill for that!”

“Why are you ashamed of this?”

While their responses are typical of many of the attitudes surrounding female-on-male sexual assault, the fact that these were really the only strong reactions—apart from Marley, Tina and Mr. Schue’s meek protestations about it being “not cool”—before the show moved on doesn’t really scream sexual assault awareness.

Artie, Sam et al.’s feedback simply buys into the notion that girls who are sexually assaulted are sluts who wanted it (Kitty’s depiction on the show as a bitchy, sexually promiscuous cheerleader proves this, though in their defence I doubt the writers had this storyline in mind when they created her character) and boys are sexually awakened studs. Had the episode aired a follow-up scene in which Mr. Schue led the class in an after school special-esque speech about the detrimental effects of sexual assault and the accompanying attitudes surrounding it, it would have been schmaltzy and patronising as only Glee can be, but at least it would have taken a crack at dismantling such bias.

One thought on “TV: Glee—Female-on-Male Molestation is, “Like, Every Teenage Boy’s Fantasy.””