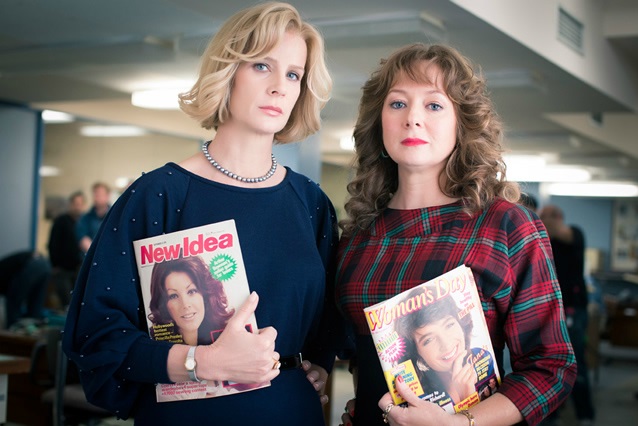 It’s interesting that the miniseries that charts the rise and rise of Woman’s Day under the leadership of King to overtake New Idea as the premier women’s weekly magazine in Australia aired at the time of all the hullaballoo surrounding the rights to publish pictures from Jennifer Hawkins’ Bali wedding.

For those who haven’t been keeping score, Bauer Media’s Woman’s Day paid upwards of $300,000 to publish exclusive pictures from the former Miss Universe’s wedding to long-time beau Jake Wall, but not before Channel 7, and their associated print platform, Who magazine, put paparazzi pics from a hovering helicopter into the public domain. Sounds like a storyline from the next instalment of Paper Giants…

Magazine Wars addresses the pursuit by the paparazzi for the hottest pics during the height of the public’s obsession with the royals, Squidgygate, Camillagate and, of course, Princess Diana’s death, which was arguably caused by the paps. This is juxtaposed with the diving accident death of King’s husband, Pat, whose body has never been found, and King suddenly found herself on the pages of the magazines instead of dictating what was on them. While King and boss Kerry Packer stare at the word “Killer” spray-painted in red on the roller door to ACP’s parking garage and the Woman’s Day office gets threatening phone calls, King laments that she’s only giving the people what they want, before the closing credits roll against a backdrop of Paris Hilton in jail, Anna Nicole Smith’s tragic downfall and Kim Kardashian’s bikini body.

Woman’s Day and its magazine war with New Idea may have been partly responsible for Australia’s growing obsession with celebrity culture, but King’s right: magazine circulation may be dwindling currently, but for a while there gossip rags were modern culture’s guilty pleasure du jour, and that obsession has transferred online to TMZ, Perez Hilton and the like. Princess Di and her ilk may have tried to escape the paparazzi, but in this day and age, they’re an accepted part and parcel of being in the public eye.