This year has been one of professional development. I’ve completed two unpaid internships at Meanjin and The Lifted Brow, I’m working for Outback Championship Wrestling as their TV show’s host (which I have no idea how to do!) and I’ve spent my fair share of dosh on both in-person and online workshops, the most expensive of which was the Blogcademy, at upwards of $AU800.

That event took place last week at the Establishment Studios on Grattan Street in Prahan and was hosted by darlings of the blogging world Gala Darling, Shauna Haider and Kat Williams. I’d secured my place earlier in the year before I’d done many of the other workshops I mentioned above so by the time last week rolled around I was feeling about as professionally developed as I’m going to get so I wasn’t as excited as some of the other Blogcadettes seemed to be. Another factor that contributed to my stillness was that I’ve long stopped trying to monetise my blog, and instead I’m focusing on my freelance career (more to come on that soon).

Having said that, though, what I was most looking forward to was being around successful businesswomen who I hoped would inspire me going into the New Year.

While I certainly felt galvanised by Gala, Shauna and Kat and their stories, I felt that the workshop was a bit “Blogging 101” and that anyone who already had a blog, as was the case with all but one or two of the attendees, would already be familiar with much of the content.

I told some of the Blogcadettes at lunch on the first day what I was hoping to get out of the class, and that watching the Headmistresses divide the modules that make up the Blogcademy amongst themselves based on who was best equipped to teach them impressed me. As someone who really values their time and will not work for free anymore, I really respect the three women’s routine and that they were also able to work on their own businesses and blogs in the downtime between teaching modules. (What impressed me less was that the handful of volunteers assisting over the course of the two days were unpaid.) 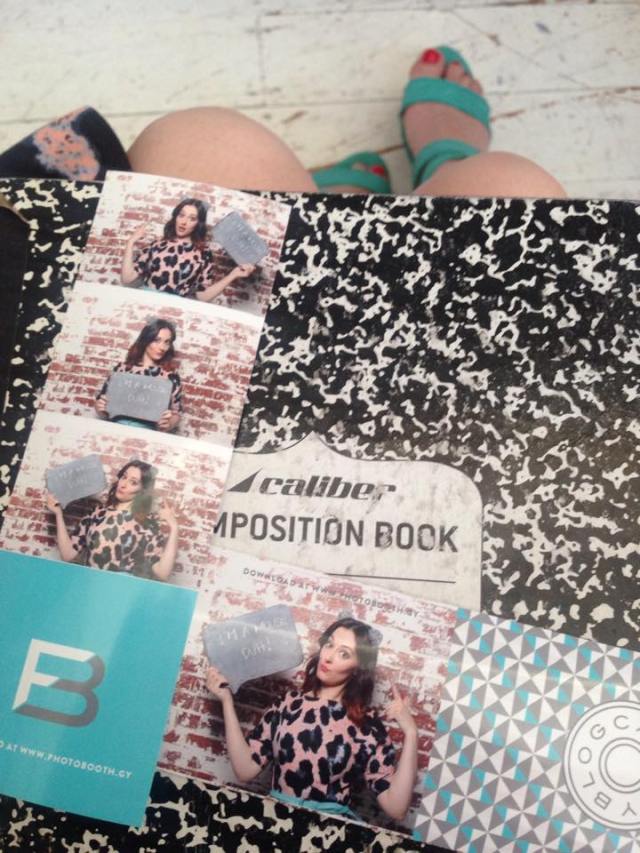 Putting to use my newfound Instagram skills after abusing the photobooth.

As the second day wore on, it became clear to many of the Blogcadettes that we perhaps weren’t going to get our $800 worth of blogging wisdom. The first half of the day consisted of taking the perfect Instagram picture, which is all well and good for those who rely heavily on that mode of social media such as Gala, Shauna and Kat, but I really hoped to get something more out of the social media component than how to take the perfect selfie. We then proceeded on to a one hour and fifty minute lunch before starting back on how to monetise your blog. By that point all the attendees had had a chat about the Blogcademy not living up to our expectations and that disillusionment could be felt in the Establishment Studios.

I’d told one of the other Blogcadettes my admiration for Gala, Shauna and Kat’s time management skills and she agreed but added that it could be construed as boredom, disinterest and concern with what was happening on their Twitter and Instagram than being engaged with us. It really hammered home that they’re businesswomen looking to make money from us; they’re not our friends as much as they may make us feel that way when reading their blogs (which could perhaps be the benchmark for successful blogging).

A couple of other people said that the bulk of the notes they made whilst in the workshop were of how they would better facilitate it, which is a pretty damning testament. Many others were disappointed at the lack of engagement and one-on-one time; “was anyone addressed by name over the two days?” someone wondered. (The consensus was mixed on the use of nametags, which I think could have been helpful.)

I’m making the Blogcademy sound like a painful, not al all valuable chore of a workshop and it was anything but. I got some good feedback on my blog, and somewhat of the kick up the ass I needed to implement changes to it. I probably wouldn’t recommend it, and I would encourage anyone looking to help out the next time the Blogcademy rolls into town to ask for payment; with 150 attendees in 2014, there should surely be some funds left over to support other budding businesswomen. (What’s that they say about women who don’t support other women…?) But the most invaluable aspect of the workshop was meeting the awesome women in the blogging community that travelled from interstate and overseas to attend, which I really respect and admire. Those who live in Melbourne are some kick-ass ladies I’m really looking forward to meeting up with again.

Failing that, at least I’ll be able to claim the Blogcademy back on tax!

11 thoughts on “Event: The Blogcademy Melbourne.”