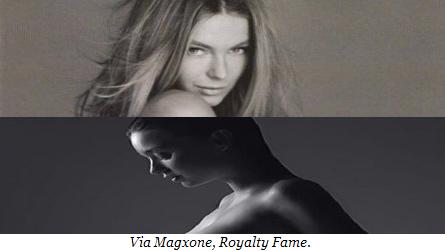 Following on from last week’s post reflecting on Jennifer Hawkins’ nude cover for Marie Claire, I started thinking about the flak Hawkins received for it.

Why was Hawkins vilified for daring to bare her unairbrushed body, knowing full well the potential criticisms that could come with it? Just because she’s a hot model doesn’t make her any less qualified to comment on the body image debate.

Another prominent Australian model who gets her kit off, but at a far more frequent rate than Hawkins, is David Jones ambassador Miranda Kerr.

While Hawkins’ employer Myer may have come out on top in the wake of the David Jones sexual harassment case, Kerr seems to be the model who came out on top, continuing to bare her baby belly in all the publications.

Demi Moore, Christina Aguilera et al. have proved that the pregnant female is a creature of beauty; one that should be celebrated on all the glossies. The same is true for Kerr, whose bump has spent a great deal of time in the limelight: she announced her pregnancy in Spanish Vogue in September, paraded down the Balenciaga runway at five months along, and was the first pregnant cover model for Vogue Australia. In addition, she shunned Demi and Christina’s cover-ups and went completely starkers for W’s December issue.

Frankly, I’m a bit sick of Kerr, her baby bump and her bits. It seems you can’t open a magazine or blog post without seeing her naked body plastered all over it, even before she got knocked up. Sure, she’s nice to look at, but if you’ve seen her once, you’ve seen her a million times.

So why is it that Kerr can get her kit off every second week and be celebrated for it, while Jennifer Hawkins, who posed for Marie Claire for charity, and whose private bits we are yet to see, was chastised and her star somewhat faded since the incident?

Can someone answer that for me?

Related: One Year On: The Jennifer Hawkins/Marie Claire Scandal.