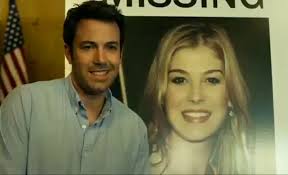 The movie version of Gone Girl, starring Ben Affleck as Nick Dunne and Rosamund Pike in the title role and based on the 2012 book of the same name by Gillian Flynn, was released in theatres in October. While Flynn’s manuscript gives equal time to its disturbed married main characters in the form of Amy Dunne’s (Pike) dairy entries and alternating chapters from Nick’s point of view, the film adaptation made it clear that Gone Girl isn’t about the gone girl in question at all, but about her NiceGuy™ husband, who is sick and tired of all the “crazy bitch whores” in his life “picking [him] apart”, and how he deals with his wife’s sudden disappearance. Sounds like a real nice guy to me!

Affleck’s early roles in Kevin Smith’s late ’90s odes to man-children, Mallrats and Chasing Amy, are apt precursors to the film directed by David Fincher and adapted for the screen by Flynn herself. Nick spent the majority of the 2 ½ hour-plus movie chasing another Amy when it emerges that his wife’s apparent kidnapping—or, god forbid, murder—was an elaborate, sociopathic ruse to frame the inattentive and at times abusive Nick. Through Amy’s diary entries we see that the oft-mused about “Cool Girl” she’s led her husband, the audience and, indeed, herself to believe she embodies is nothing more than a narcissistic reverse Pygmalion creation. To refresh, Cool Girls are, “Hot and understanding. Cool Girls never get angry; they only smile in a chagrined loving manner and let their men do whatever they want. Go ahead, shit on me. I don’t mind. I’m the Cool Girl.

“Men actually think this girl exists. Maybe they’re fooled because so many women are willing to pretend to be this girl.”

Let us study the ways in which Amy and Nick Dunne play right into these fictions.

Much has been made of the abovementioned Cool Girl, and while Amy is by no means an innocent victim in the cat-and-mouse game her marriage devolves into, Flynn—both on paper and screen—also crafted an interesting commentary on Nice Guys and their entitlement to women.

Flynn writes in the book that Nick would “literally lie, cheat, and steal—hell, kill—to convince people you are a good guy” and not the “daddy’s boy” who abuses women. Pages later: “Women are fucking crazy. No qualifier: Not some women, not many women. Women are crazy.”

At the risk of sounding like a misandrist victim-blamer, in a way Nick almost deserves what Amy does to him, not only for shoving her into a wall and calling her and other women “fucking cunts”, but also for his utter unwillingness to take responsibility for his part in his toxic marriage. He even needs to be prompted by the lead detective on Amy’s case, Rhonda Boney (played by Kim Dickens on screen), to notify his missing wife’s parents of her disappearance. Flynn writes that Nick let himself “drift on in the miserable situation, assuming that at some point Amy would take charge. Amy would demand a divorce, and then I would get to be the good guy… This desire—to escape the situation without blame—was despicable.” In his effort to come across as the consummate Nice Guy, Nick becomes a doormat for Amy’s wicked ways. After all, Nick “couldn’t bear to have everyone in this family-values town believe he’s the kind of guy who’d abandon his wife and child. He’d rather stay and suffer with me. Suffer and resent and rage.” And suffer and resent and rage he does.

Using perceived niceness as a scapegoat is also a tactic Amy employs when she frames a second man in her quest for revenge. Desi Collings, played eerily in the film by Neil Patrick Harris, was an obsessive high school boyfriend of Amy’s with whom she’d kept in touch in the two decades since because “it’s good to have at least one man you can use for anything”. When Amy’s initial plan to live off the grid while she sent Nick “to the woodshed” goes awry, she uses the reliable, but equally-as-controlling-as-Nick Desi to shelter her from the storm while she contemplates her next move (hint: it involves a lot of blood). In the aftermath of Amy’s return, she maintains that she just “tried to be nice to [Desi]”. Here Amy plays into the excuse used by victim-blamers far and wide: you were too nice to him, that’s why he followed you home/raped you/murdered you.

The “Blurred Lines” of consent that Gone Girl alludes to here can be seen in the 2013 song of the same name by Robin Thicke. In a meta move on the part of the movie’s casting director, model Emily Ratajkowski, who appears topless and performing suggestive acts with animals and balloons in the “Blurred Lines” video, can also be seen in her first major feature film role as Nick’s college-aged mistress. Long after Thicke ceased to be pop culturally relevant his “rape anthem” is still inspiring sociopaths the world over.

Speaking of, Nick’s lawyer in the film, “defender of white killers everywhere” Tanner Bolt (Tyler Perry) conjures images of the Isla Vista shooting rampage committed by college student Elliot Rodger in May this year. Rodger’s 140-page manifesto and video messages vilifying “blonde sluts” who “starved me of sex” gave motive to his attacks on both men and women. In an effort to debunk that #NotAllMen are misogynist time bombs just waiting to rape and murder women—#YesAllWomen—and prove that patriarchy hurts all genders the respective hashtags and a social media debate was spawned. The theatrical release of Gone Girl poses more questions as to whether social media campaigns like this are successful: were general audiences unfamiliar with the scathing commentary on gender Flynn crafts on the page savvy enough to pick up on it in the theatre?

Like Rodgers’ misogynistic missive that led to the deaths of six people, Amy constructs a manifesto of her own. Upon the first encounter of Gone Girl, you’d be confused as to whether the internalised misogyny that Amy spews in her fake dairy entries is what Flynn truly believes or a dissection of it. Does Gone Girl perpetuate the all-to-common attitudes that women are lying, manipulative bitches and their male partners “dancing monkeys”?

On the whole, the Gone Girl narrative as told on film is essentially about the Nice Guy who’s judged in the court of public opinion to have murdered and disposed of his wife. At Amy’s candlelight vigil, Nick takes the time to defend himself against the media’s accusations that he’s creepy (“but hot”, as some “groupie whores” deem him to be), socially inept and an obviously guilty spouse instead of, you know, pleading for information that might help lead to finding the “gone girl” in question.

As Amy writes in an attempt to justify her scheme, “everyone loves the Dead Girl”. This may be so, but we have a deeper desire to get to know the white men who abuse the “unwanted, inconvenient,” formerly Cool Girls than the Dead Girls themselves. And unfortunately, Gone Girl doesn’t suggest otherwise.

When it comes to the sexual politics of celebrities and blatant double standards between the genders in Hollywood, Clementine Ford sums it up best in a recent Daily Life piece:

“Kristen Stewart has found herself in a similar position [to Lara Bingle and her affair with Brendan Fevola] after the revelation she had an affair with the married director of Snow White and the Hunstman. The much older Rupert Sanders has a wife and children, but it’s Stewart who’s been labelled a ‘trampire’ and a home wrecker. A recent US tabloid cover story warned Jennifer Garner to be ‘very, very worried’ at the news Stewart was in talks with Ben Affleck to make a film together. For Stewart and Bingle, the message is clear—they were caught using their sexuality inappropriately, and now they have to pay the consequences. Sanders and Fevola have since gone back to their wives. Unlike Stewart, Sanders didn’t lose the lucrative contract to work on the next Snow White film. Meanwhile, Fevola has since featured on Channel Seven’s Dancing With The Stars, and shared the reconciliation with his wife in a saccharine spread for New Idea. Will their sexual indiscretions and choices follow them around, ad infinitum? It’s highly unlikely.”

A girl after my own heart.

Related: Why Are Famous Men Forgiven for Their Wrongdoings, While Women Are Vilified for Much Less?

In Defence of Lara Bingle.

[TheVine] All Dogs Go to Seven. 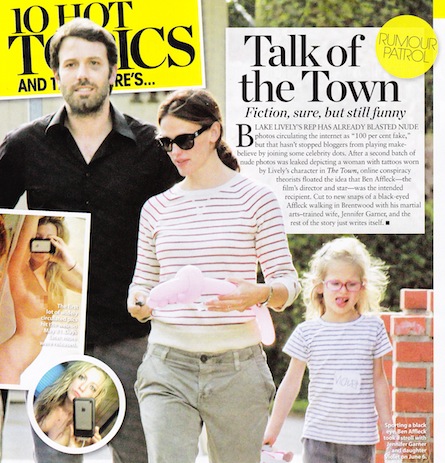 While garnishing the article with a “Rumour Patrol” disclaimer softens the blow a little (both puns intended!), I’m not sure Who’s doing anyone any favours by insinuating that Jennfer Garner may have given Ben Affleck the black eye he’s sporting in this paparazzi pic of the family in the wake of the “Blake Lively” nude photo scandal.

Feel free to speculate, as Who has surely done… 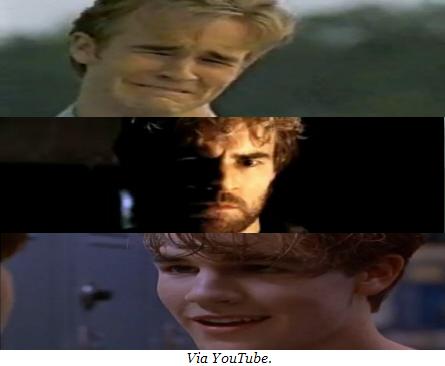 As Dawson Leery on late ’90s teen angst television staple, Dawson’s Creek, James Van Der Beek was a whiny pushover who always lost the girl to the sexy and witty and aptly-named Pacey Witter. With the exception of getting drunk and singing the blues with Andy on his birthday, Dawson’s Creek perhaps would’ve been better without its titular character.

Van Der Beek hasn’t done a whole lot since Dawson’s Creek ended in 2003, but what he has done has been a far more apt use of his acting talents.

I recently watched the movie adaptation of Bret Easton Ellis’s Rules of Attraction, in which Van Der Beek plays Sean Bateman, American Psycho’s Patrick Bateman’s little brother. While the film, like the book, is quite left of centre and something not everyone is likely to have seen, Van Der Beek is chilling as a narcissistic, drug-taking/dealing, death-faking rich college boy, alongside Ian Somerhalder in a similarly affecting performance.

And anyone who watches Criminal Minds would be hard pressed to forget the formerly innocent Dawson as Tobias Hankel, the serial killer who was so damaged by his abusive father, that he took on said father’s demeanour in order to carry out his killings. In addition, he injected everyone’s favourite agent, Spencer Reid, with heroin, causing Reid to struggle with his newfound addiction in later episodes.

Angus, Van Der Beek’s debut film role in 1995, is a much lauded cult teen movie in which he plays the popular jock to Angus’s overweight outcast. I haven’t seen the film personally (I plan to watch it during my convalescence from wisdom teeth surgery at the end of the week), Jezebel seems to like it, and that’s good enough for me!

Van Der Beek is not unfamiliar to parodying himself, either, with cameos in Scary Movie and Jay & Silent Bob Strike Back (worst movie ever, but the running Ben Affleck joke is a cracker!), and comedic turns in Ugly Betty and How I Met Your Mother.

If you’re indifferent to James Van Der Beek, like I was until I really paid attention to his acting life after Dawson’s Creek, I suggest you take a look at his post-Dawson’s résumé to truly understand the awesomeness that is Van Der Beek.