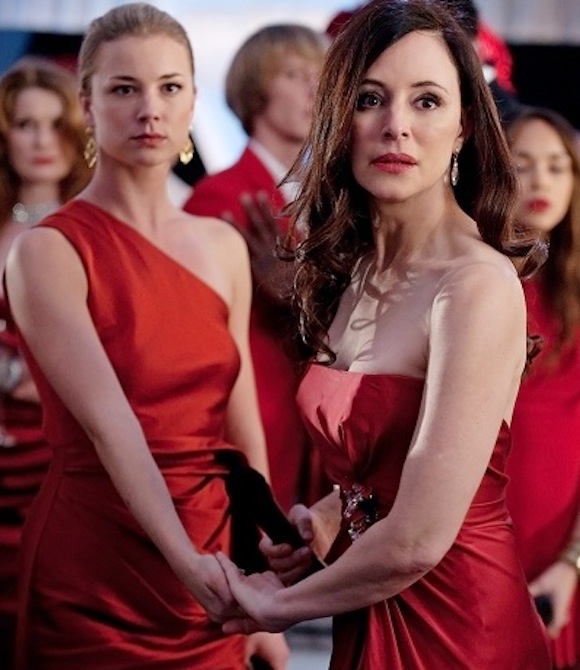 In an episode that aired a few of weeks ago—“Power”—judge’s wife and friend of the Graysons Patricia Barnes revealed she’s a sufferer of domestic violence. With protagonist Emily Thorn’s encouragement, Patricia helps piece together part of the Revenge puzzle and purge herself of her powerless victim status. Because the women of Revenge are anything but powerless.

For a show that focuses so much around power, money, killing and vengeance, women really are at the centre of these traditionally male attributes and they’re calling all the shots.

Obviously, there’s Emily/Amanda, and the avenging of her father’s wrongful incarceration for crimes he didn’t commit and his subsequent death, which the show revolves around, and her juvie parallel Amanda/Emily, whose surfacing (and resurfacing) in the Hamptons last season threw everything into disarray.

But we all know Revenge’s most intriguing female character is Victoria Grayson. Madeleine Stowe plays the aloof ice maiden with a past that was revealed in season two’s “Lineage” to perfection, which kind of makes you understand why she is the way she is.

And then there’s the secondary—albeit still important to the story—female characters Charlotte, Padma, Emily’s mum, Helen Crowley and Ashley, who are all strongly rendered, which is more than can be said for some of the male characters.

Daniel Grayson has proved himself to have some gumption after all when he overthrew his father from the head of Grayson Global this season. Viewers could be excused for thinking this wasn’t the case last year, when it seemed like all Daniel did was follow Emily around like a puppy.

This is quite the juxtaposition to Jack, who is a lovely guy but tends to get walked over because of it. He’s also a somewhat feminised character, showing emotion often and saying things like “I’m going to prove that you can have it all”.

The thing Daniel and Jack both have in common, though, and with the rest of the male cast, for that matter, is that they are easily manipulated by the women in their lives. Daniel “floats through life on the crests of women, unable to make his own decisions”. Conrad, although he thinks he’s the head of the Grayson household, is also subtly controlled by Victoria, and allows himself to be influenced by Ashley’s business acumen when she returns to work for him in “Sabotage” a few weeks ago. Nolan has proved himself to be a loyal friend and revenge-partner to Emily, but is treated like absolute shit by her, not to mention being screwed over several times by Padma. Aiden is probably the strongest male character on the surface, but when he rebels against Emily, he’s dressed down by his storyline and comes crawling back to her way of exacting retribution in last night’s “Union”. Let’s not forget Mason Treadwell, perhaps the biggest victim of Emily’s vendetta (you know, apart from all the men who end up dead), who’s now serving time for crimes he didn’t commit in the vain hope Emily comes through on her promise to give him her scoop when it’s all over.

Speaking of Emily, she is a strange character, isn’t she, in that she doesn’t really have any personality traits (though it could be argued that it’s all part of her plan to mask her true identity and come across as a blank canvas onto which people can project their perceptions of her). Revenge is a plot-driven show, so you get behind Emily’s plight because of the hardships she’s faced in her past. But very rarely do we get a glimpse into her inner psyche. It’s perhaps only when Sammy, her dog, dies and when her mum, Kara, comes back from the dead that we see a glimmer of emotion. This is on the contrary to someone like Victoria whose emotions are kept close to her chest but which you can see in her eyes, or even Amanda, who fluctuates between anger, protection and passion. When Amanda accuses Emily of destroying lives with her obsession, Emily justifies it by attesting that she’s “righting wrongs”. And the only way to do that is to “close your heart if you want to succeed.” Ahh, the wise words of Mr. Takeda, one of the only male characters whose integrity manages to remain unscathed.

I wouldn’t go as far as to say Revenge is a feminist show, but it is refreshing to not hear a mention of a woman’s incapability to pull off what Emily, Victoria, Ashley et al. have managed to, that I recall. Vengeance is perhaps not the most attractive motive to have, but Emily is steadfast and solitary in her mission to avenge her father. She employs mostly men to do some of her dirty work, but she’s the mastermind of the operation. And while Victoria’s scheming from the confines of her Hamptons mansion isn’t necessarily the most positive portrayal of a woman, she is a smart lady, much like Ashley, who refused to accept her firing by Victoria after she was prostituted out to one of Daniel’s rivals and caught sleeping with Conrad and hustled to find a consulting position with him like the “cat [who] dragged itself back in”. Revenge is a show in which the women are just as reprehensible—and powerful—as the men.