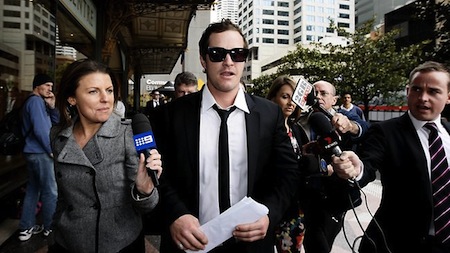 I read a comment on MamaMia after the airing of The Shire on Monday night that asserted with Cronulla girl Lara Bingle and now The Shire, someone from Sutherland is calling the shots on Ten.

Last night on Being Lara Bingle, Lara’s brother Josh let his quintessential Cronulla bogan come through when he pleaded guilty in court to assaulting a fellow racegoer at Melbourne Cup three years ago. In the wake of Lara’s Famous cover, he admonished his sister for being fat. Can we get over this already? As Lara tells Erin McNaught in an interview for MTV, she’s a normal sized girl, so what are the magazines trying to tell women who might be bigger than average?

Lara, Josh and Lara’s friend, Cara, discuss her weight gain after her breakup with Michael Clarke, and Josh says most girls get skinny with stress, but Lara got fat. Lara tells him that most men don’t like anorexic girls like he does, and Josh defends himself, saying he just doesn’t like girls who are “fat”.

Lara tells the pair that if she was that fat when she broke up with Clarke, they should have said something to her. Josh tells her he told her she was fat every single day. Jeez, this guy sounds like a stand-up brother, amiright?

Just like on The Shire, a person’s primary value seems to be placed on their looks. It’s not about a woman’s “brains” or “ability”, as McNaught contends, just as long as they’re skinny.

Who the Bloody Hell is Body-Bullying Lara Bingle?

Elsewhere: [MamaMia] The Shire: Did You Watch?