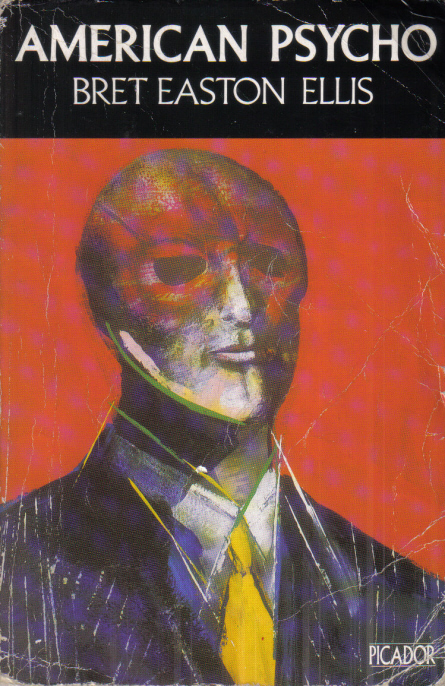 When I heard Bret Easton Ellis was coming to Melbourne for the Writers Festival, I was intrigued to hear him speak in person, to say the least.

My first, and only, exposure to Easton Ellis prior to reading American Psycho was his 1998 release, Glamorama. I had high expectations for that book, and I was sorely disappointed. I found it too fast paced and celebrity-obsessed which, granted, was the point of the story. However, the graphic depictions of violence (a plane crash with flying pieces of sheet metal decapitating whole rows of passengers, anyone? Or how about a massive miscarriage followed by internal haemorrhaging and subsequent death of the main character’s, Victor Ward, girlfriend?) and sex were far too much.

So needless to say, I was very apprehensive about entering into a literary relationship with American Psycho, but I wanted to at least have read Easton Ellis’ most famous work before seeing him live. (Alas, this is not meant to be, as tickets to his talk sold out within minutes of going on sale! As he, and Buffy creator Joss Whedon, whose talk also sold out, are the only writers I’m interested in seeing at this years surprisingly uninspiring Melbourne Writers Festival, I guess I’ll be giving it a miss this year.)

This time around, however, I was pleasantly surprised.

Again, American Psycho is hard to get into initially, as it jumps straight into a boys night out with protagonist Patrick Bateman and his equally materialistic and über-boring posse of yuppie acquaintances (Bateman is too narcissistic to have actual “friends”). But after persevering up to the first kill, I liked what I read.

Even squirming along Struggle Street during the gory descriptions of the murders—on public transport, no less!—was still a fairly enjoyable literary journey. To give you a taste of just how well Easton Ellis does horrific homicide in print, here’s a description of Bateman’s first kill:

“… I reach out and touch his [the bum’s] face gently once more with compassion and whisper, “Do you know what a fucking loser you are?” He starts nodding helplessly and I pull out a long, thin knife with a serrated edge and , being very careful not to kill him, push maybe half an inch of the blade into his right eye, flicking the handle up, instantly popping the retina.

“The bum is too surprised to say anything. He only opens his mouth in shock and moves a grubby, mittened hand slowly up to his face. I yank his pants down and in the passing headlights of a taxi can make out his flabby black thighs, rashed because of his constantly urinating in the pantsuit. The stench of shit rises quickly into my face and breathing through my mouth, down on my haunches, I start stabbing him in the stomach, lightly, above the dense matted patch of pubic hair. This sobers him up somewhat and instinctively he tries to cover himself with his hands and the dog starts yipping, really furiously, but it doesn’t attack, and I keep stabbing at the bum now between his fingers, stabbing the backs of his hands. His eye, burst open, hangs out of its socket and runs down his face and he keeps blinking which causes what’s left of it inside the wound to pour out like red, veiny egg yolk. I grab his head with one hand and push it back and then with my thumb and forefinger hold the other eye open and bring the knife up and push the tip of it into the socket, first breaking its protective film so the socket fills with blood, then slitting the eyeball open sideways, and he finally starts screaming once I slit his nose in two, lightly spraying me and the dog with blood, Gizmo blinking to get the blood out of his eyes. I quickly wipe the blade clean across the bum’s face, breaking open the muscle above his cheek. Still kneeling, I throw a quarter in his face, which is slick and shiny with blood, both sockets hollowed out and filled with gore, what’s left of his eye literally oozing over his screaming lips in thick, webby strands. Calmly, I whisper, “There’s a quarter. Go buy some gum, you crazy fucking nigger.” Then I turn to the barking dog and when I get up, stomp on its front legs while it’s crouched down ready to jump at me, its fangs bared, immediately shattering the bones in both its legs, and it falls on its side squealing in pain, front paws sticking up in the air at an obscene, satisfying angle. I can’t help but start laughing and I linger at the scene, amused by this tableau. When I spot an approaching taxi, I slowly walk away.”

Now if that didn’t make you wince and writhe vicariously, there’s also the attacks of several other dogs, the tortures of countless prostitutes, the dissolving of several friends’ bodies in lime, cannibalism, the murder of a child, the capture of a sewer rat to use in later tortures, and in a comical scene that illustrates just how sad and detached Bateman has become in his life of depravity, he feeds his girlfriend (just one of many he has on the go at any given time) a frozen urinal cake coated in chocolate and served in a decadent Godiva chocolate box.

If the reader needs more proof of Bateman’s derangement and obsessive compulsive consumerism, they need only to look at the chapters interspersed throughout the narrative on business cards, sound systems and musical artists of the time (1991), like Genesis, Whitney Houston and Huey Lewis & the News.

Here is another example:

“Another choir, on Lexington, sings ‘Hark the Herald Angels’ and I tap-dance, moaning, in front of them before I move like a zombie to Bloomingdale’s, where I rush over to the first tie rack I see and murmur to the young faggot working behind the counter, “Too, too fabulous,” while fondling a silk ascot. He flirts and asks if I’m a model. “I’ll see you in hell,” I tell him, and move on.

“Some kind of existential chasm opens up before me while I’m browsing in Bloomingdale’s and causes me to first locate a phone and check my messages, then, near tears, after taking three Halcion (since my body has mutated and adapted to the drug it no longer causes sleep—it just seems to ward off total madness), I head toward the Clinique counter where with my platinum American Express card I buy six tubes of shaving cream…”

This kind of stream-of-consciousness and disjointed conflict between the Patrick Bateman that is presented to the outside world—the one that manages to convince a cop investigating the murder of one of Bateman’s lime victims that he has nothing to do with the disappearance—and the inner workings of his own mind, and even again with the superhuman he becomes when killing, continues and only becomes more frequent as the tale continues.

While there is no finite conclusion to the story—one might guess that Bateman was caught during the murder of a taxi driver, when the tone switches from first person to third person, however it is later revealed that he escaped, but is recognised by another cab driver—that only makes it all the more disturbing.

Easton Ellis is a very clever—though slightly disturbed; you would have to be to write as graphically and as convincingly as he does—author, and I would have loved to hear him speak about his most prolific work.

However, while I rate this one highly, I probably won’t return to, nor enjoy, his other novels.

In other—and final, for this week at least—workaholics news, from The New Yorker’s Book Bench, “there’s no point in worrying about all those books you haven’t gotten to yet, because very often our preconceived idea of what a book will be is just as valid and enlightening as the book itself might be.”

So do bookworms rejoice in the fact that there’s no need to get through our stacks of unread books (personally, I have The Babysitters Club, American Psycho, a second reading of Mia Freedman’s memoir, Mama Mia, and Hollywood Ending by Kathy Charlesto get through—a well balanced literary meal, if a little too heavy on the fluff, don’t you think?); that the very idea of what they’re like will sustain our literary appetites?

I understand what author Kristy Logan’s original hypothesis is attesting to, that sometimes “an unread book is an intoxicating, romantic thing, and the act of reading is, in one sense, destructive” to what could have been, however I don’t agree with it.

Fiercely loyal, I will not put a book down until the very last page, no matter how much of a struggle it was to read. Dr. Zhivago, I’m looking at you. I had great expectations for that book, however I was brutally disappointed. Bret Easton Ellis’ Glamorama is another one that comes to mind. I do feel like by reading these books, my fantastical idea of them before I turned their pages has been knocked out of me.

On the other hand, there’s nothing like being utterly surprised by how good a book is, and how profoundly it affects you. Frequent readers of this blog will know that Another City, Not My Own is that for me. The Lovely Bones is one I was pleasantly surprised about, (at the risk of sounding like a bogan) only reading it because I wanted to see the film. While I think the ending was utter bullshit, the integrity of the rest of the story outweighs the disappointing ending for me.

Logan assures us that she doesn’t encourage leaving “all books unread”, questioning whether she should call them “‘pre-read’ books instead”.

The excitement of a “pre-read book”? Now that I can understand.

[The Millions] Confined by Pages: The Joy of Unread Books.