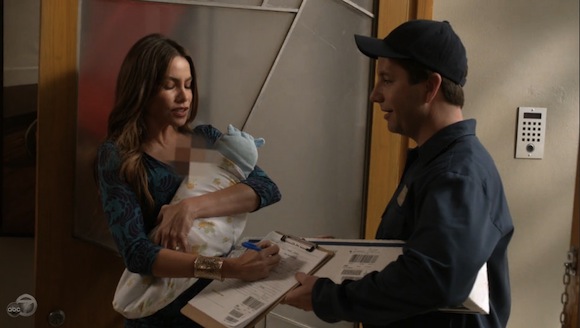 Older men telling breastfeeding mothers to “be a bit classy about it” seems to be the order of the day, and art is imitating life on Modern Family.

First David Koch made that massive gaffe about breastfeeding mothers on Sunrise, insinuating that there’s a time and place for it and it isn’t in public, and now Modern Family’s resident baby boomer, Jay Pritchett, is shaming Gloria for giving their newborn, Fulgencio Joseph, sustenance via her breast milk. Similarly to Kochie’s sentiments, Jay tells Gloria not to “do that in front of strangers” when he catches the mailman staring at her bare breast—albeit with a baby suckling it—and that perhaps a “dark closet” might be more appropriate. Yeah, because breastfeeding mothers just love expressing milk in public toilets or fitting in a breastfeed whilst changing their baby’s nappy in a baby change room.

We’ve all heard the outcry surrounding the sexualisation and shaming of breastfeeding: it’s the most natural act; it’s what breasts were intended for; breastfeeding shouldn’t be seen as sexy, etc. But when you’ve got popular personalities like Kochie and TV shows like Modern Family pushing the opposite agenda, can we really expect the public perception of breastfeeding as sexual and/or shameful to change?

Further to this, when Manny expresses (pardon the pun) a fixation with the female form in art class, everyone jumps to the conclusion that Gloria’s voluptuousness and her clingy maternalistic treatment of her son is at the crux of Manny’s newfound sexual awakening. Breastfeeding and motherhood are, again, completely natural and all but essential for the evolution of the human species, not exhibitionist performances at the detriment of male children.

Once again, Modern Family fails to emphasise the “modern” part of its title…

Related: Modern Family is Anything But. 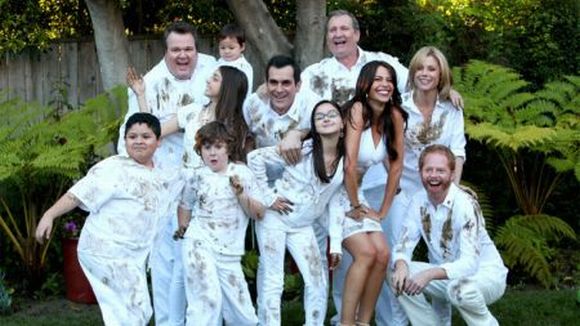 After a recent spat with my housemate about the apparent modernity of Modern Family, in which he defended the show for its gay couple with an adopted Vietnamese baby and a strong Latino presence while I cried stereotyping, I decided I should actually watch an episode or two of it before I denounce Modern Family as an archetype perpetuating farce.

Now, with three and a half seasons and some informed opinions under my belt, I can wholeheartedly say I abhor the sexist tropes of the fiery Latina, Gloria, and the shrill, controlling housewife, Claire, and Modern Family’s blatant racism, homophobia and slut-shaming. Let me count the ways…

Right off the bat in the sixth episode of season one, “Run for Your Wife”, there were some troubling stereotypes about stay-at-home mums. When the Dunphy kids head off to their first day of school for the year, mum Claire looks forward to some downtime to get started on a new book. Phil, who’s supposed to be the breadwinner of the family, is also home and wants to hang out with his wife. After blowing off some open-houses he’s supposed to be putting on as part of, you know, his job as a real estate agent, Phil gets embroiled in a mid-afternoon jogging race with Claire.

As a child who grew up with a stay-at-home mum, I can tell you that I never once saw her sitting down to read a book in the middle of the day or challenge my dad to a childish competition. There was too much cooking, cleaning, washing, shopping and picking up to do. In fact, my dad was barely home and often working more than one job in order to put food on the table and keep us in a home one fifth of the size of the Dunphy’s, which is more than we can say for Phil who is rarely shown at work.

While the acting of Ty Burrell (Phil) and Julie Bowen (Claire) is something to write home (or at least the awards shows) about, their characters leave a lot to be desired. Phil is always dropping the ball (or getting it thrown into his face, as in “Door to Door” in season three) on being a functioning human being, let alone a good husband and father, and Claire often refers to him as her fourth child (she technically only has three: Haley, Alex and Luke). The trope of wife-as-replacement-mother is a tired one, but that doesn’t stop Modern Family for milking it for all it’s worth.

This brings us to Gloria, who is anything but. She’s young, sexy and, most notably, a loud, sassy Latin woman who’s always getting arked up about something. In season one’s “Up All Night”, Gloria’s son Manny’s dad comes to visit. While Gloria is now remarried to the older and dependable Jay, ex-husband Javier is a fellow fiery Latino who tries to make up for his absence by showering Manny with extravagant gifts. In the episode, Javier takes Jay and Manny to a baseball field in the middle of the night, and the next day comes bearing motorbikes. Gloria becomes audibly incensed that Jay’s falling for Javier’s tricks, like she used to, and storms off, yelling in Spanish. Every portrayal of a Hispanic woman in pop culture doesn’t have to be that of the “hot blooded” Latin mama; just look at the gay, Latina orthopedic surgeon Dr. Callie Torres in Grey’s Anatomy, a show that is far more modern than one with that word in its title, for example.

Speaking of the gays, what portrayal of contemporary American life would be complete without the requisite homosexual couple with an adopted Asian baby? Certainly not Modern Family, which turns the gay dial up to eleven with stay-at-home dad, former farm-dweller and part-time clown Cam, the uptight, dogmatic (unsurprisingly the brother of Claire) lawyer Mitchell and their über inappropriate ways. For example, in “Run for Your Wife”, Mitchell accidentally bumps baby Lily’s head against a door frame, and they take her to the doctor. The doctor happens to be Asian-American, so Cam embarks on a sermon about how he and Mitchell intend to raise Lily with influences from her Asian roots, completely disregarding the fact that the doctor was born and raised somewhere in middle America and identifies first and foremost as an American.

Later on, in season two’s “Unplugged”, Cam and Mitchell try to get Lily into a preschool. When they realise Lily’s going up against an adopted African-American boy with disabled-lesbian parents for the last spot at a prestigious private school, Cam flubs the interview by emphasising his 1/16th Cherokee heritage and speaking in pidgin English. As someone who is also 1/16th Cherokee, I’m sure you can imagine my offence at this.

Cam, as I’m sure you can imagine if you don’t already watch Modern Family, is the flamboyant half of the couple, and enjoys dressing Lily up as famous gay icons and encouraging her creative side. In the episode “Chirp”, in season two, Cam goes against Mitchell’s wishes and has Lily film a commercial for a furniture store. The ad is completely racist, using emphasised Asian accent voiceovers and Godzilla, and when Mitchell points this out, Cam uses the defence of hipsters the world over: “It’s ironic.” I suppose because they have an Asian kid, they’re allowed to be racist…?

While there are some redeeming qualities throughout the show’s run, such as the “Mother’s Day” (season two), “After the Fire” (season three), and “Schooled” (recently aired as part of season four) episodes which seek to unpack gay parenting and stereotypes of femininity, masculinity and homosexuality, it’s also rife with slut-shaming (Jägermeister is a magic potion that puts girls to sleep but instead of waking up “in a castle, you wake up in a frat house with a bad reputation” in “Moon Landing”, whilst Phil marvels in “Travels with Scout” that with his “emotionally distant father” it’s a miracle he didn’t end up as a stripper), homo- and transphobia (dad Jay insinuates that Mitchell is a cross-dresser because he’s also gay in “Starry Night”), and jokes about domestic violence (when Mitchell asks his dad to teach him how to fight in “Game Changer”, Jay asks if he’s having problems with Cam).

As I’m sure Glee can attest, an after school special-esque episode here and there doesn’t make up for Modern Family’s utter lack of modernity the majority of the time.

Related: The Underlying Message in Glee‘s “On My Way” Episode.