Journalists & Trauma was a free event that occurred on Saturday morning.

I had originally planned to go to an advanced screening of The Help and associated brunch put on by Sunday Life magazine, however tickets sold out way in advance, so I thought I might as well fill my morning with something else worthwhile.

The event was hosted by Margaret Simons, and featured Dennis Miller, author of a new book on Black Saturday and the role of the media in it, and Di James, a survivor of the Marysville bushfires.

The talk focused on a report by the Centre for Advanced Journalism entitled “In the Media Spotlight: The Survivor Series”, which studies the role of the media in gathering material in the event of a tragedy, consent from those they gather material from, and the problems faced by both the media and the public affected in those situations.

There was a heavy focus on the first 48 hours of a tragedy, in which Di recounted her story of fleeing to a neighbour’s home to watch her house, car and business (the famed Marysville lolly shop) go up in flames, being cut off from communication and being unable to tell her children she was okay, having the a media chopper arrive before the authorities, and using the media to her advantage to get the message out that a) there were people there who needed to be evacuated, and b) she was alive.

James was, understandably, a bit teary in recounting these events, but all in all, she agreed with Miller’s findings that the media needs to be more sensitive when covering tragedies and trauma.

While I can see where James is coming from, having been involved in Black Saturday and seeing images of herself and her friends (some of whom didn’t make it) plastered on newspapers and being shown on television two years later (without her consent), I do believe the public has a right to know about these things.

Mia Freedman wrote in her most recent Sunday Life column about suicide and its coverage in the media. Personally, I am a sucker for details, and will go to extreme lengths to find them out. (Googling crime scene pictures of Nicole Brown Simpson and Ron Goldman wasn’t my finest moment.) Enquiring minds want to know. But do they need to?

And in this day and age of Twitter, blogs and live streaming (Journalists & Trauma was live Tweeted and streamed), most details do get out. Like anything, I think we should have the option of seeking this information out if we so wish, and shunning it if we have no interest in it.

I understand the hardships of those who are involved in tragedies, and wouldn’t wish any undue stress to them, but in the long run, I think if said enquiring minds are satisfied, they will move on to something else, leaving those affected to grieve in peace.

Jezebel also writes in praise of “The Women of the Harry Potter Universe.” 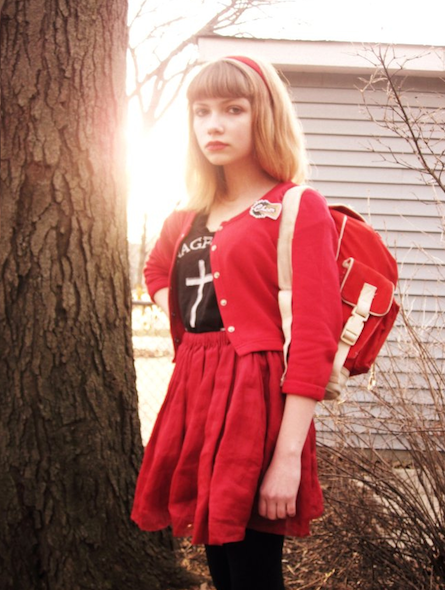 Tavi Gevinson on growing into her beauty:

“I could pretend to be an archetype of a feminist superhero and say I never want to be a conventionally attractive person. But, while I have so much respect for the people who can say that truthfully, I’m not there yet… I admit to the basic human desire to be attractive…

“Maybe I liked my face. Is that not okay?” [The Style Rookie]

If the DSK case has taught us anything, it’s that “any deviation of the victim’s life from the concept of the ‘perfect victim’ is exploited and becomes the focus of attention, as has happened to the DSK victim. Ever had a drink? Been to a party? Been a little bit late to a meeting? Lost your temper? Tried to fight back? Lied to your friends about what’s going on in a relationship? Forgiven someone? Posted a Facebook photo of you hugging someone? Well then clearly YOU ARE A DRUG-ADDLED VIOLENT SLUT BITCH and that necessitates a billion more hearings to talk about how VIOLENT and SLUTTY and DRUG-ADDLED and BITCHY you are.” [Think on This]

Still with Strauss-Kahn, Bob Ellis airs his always controversial, archaic and small-minded misogynist thoughts on the “honeytrapping” of “good men”. [ABC The Drum]

And this wraps up the DSK portion of the program:

“… I have no sympathy, empathy or even good thoughts for Dominique Strauss-Kahn. Not just because of the rape accusations but also because of his betrayal of the socialist ideals he was supposed to uphold as a prominent member of the French Socialist Party. His ideals that went through the drain when he accepted to become head of the IMF, one of the most subjugating, neo-imperialist institutions imposed on the Global South.

“And now, of course, there is no longer a case against him. However, and this is where I’d like us to focus, there is no longer a case because, it is claimed, the victim lied on issues unrelated to the rape allegations. Let that sink in for a second: a woman who is an asylum seeker/refugee, who hails from one of the poorest countries on earth (where the IMF played a big role in promoting the prevailing poverty and economic hardships that afflict her homeland) was found to have lied in order to get on with her life.” [Tiger Beatdown]

“So you want to move to New York?” Here are the realities. Not as grim as you might think, yay! [Yikes Machine]

“The World Map of Useless Stereotypes.” If they’d reduced the space allocated for New York, they might have been able to include Australia. Oh yeah, maybe they were playing up the stereotype of us being the forgotten continent of sorts. [Jezebel]

If global gender equality was represented by the FIFA Women’s Soccer World Cup, this is what it would look like. [Jezebel]

“If I Were a Girl,” also on Thought Catalog, is equal parts poignant and insulting. Interesting to get a guy’s point of view on what it would be like to be a girl.

Read what happens when “a teen… calls the Westboro Baptist Church” to talk about feminism! [Jezebel]

Waking up to the Leiby Kletzky murder crime scene. [Jezebel]

Sleazy News of the World-esque journalism has a place somewhere, right? [Gawker]

On “Writing Race.” [Zero at the Bone]

More on the should-we-tell-little-girls-they’re-pretty debate. [The Beheld]

Part two of Camilla Peffer’s “In Defence of Women Behaving Badly.” [Girls Are Made from Pepsi]

Images via The Style Rookie, Buzzfeed.