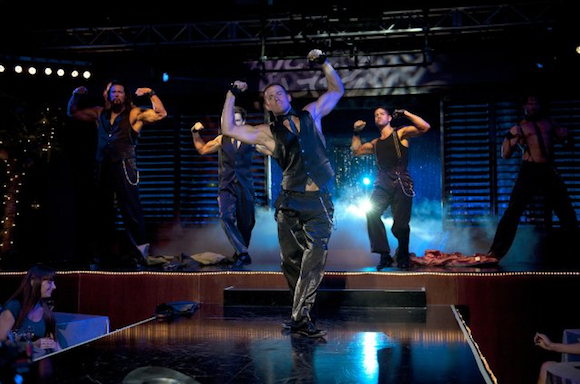 A version of this article originally appeared at TheVine.

While the world may be ending in December, and the integrity of Ted is questionable at best, I think it’s high time hetero women (and gay men to a lesser extent) turn subjugation on its head and become the voyeurs, and they’re using Magic Mike as a tool to do so.

Never before in mainstream Hollywood film can I recall a movie that so blatantly puts the male body on show for the unashamed consumption by straight women, primarily. Tom Cruise may have been shirtless for the majority of Rock of Ages, and True Blood has as much male eye candy as it does female, but Magic Mike is the first of its kind to feature conventionally attractive and perennially half-naked male actors as strippers: Hollywood’s last taboo, perhaps.

The male form has been sexualised for the last few decades, notably in underwear commercials. Remember Mark Wahlberg’s Calvin Klein’s and David Beckham’s distracting Armani ads? Or how about a shirtless Ryan Gosling in Crazy, Stupid Love, which arguably spawned the current obsession with him that has reached fever pitch? Porn star James Deen is experiencing a cavalcade of female appreciation not normally seen with adult actors. Even pay TV channel LifeStyle You is cashing in on the male body objectification trend, using in their advertisements shirtless men carrying out everyday household duties like ironing to reel the women in. (Because women are who we talk about when we talk about “lifestyle”.)

In the male stripper movie vein, there was that late ’90s UK effort, The Full Monty, which featured a bunch of average Joes getting their kit off at the encouragement of women, demonstrating that men don’t have to look like Channing Tatum, Joe Manganiello or Matthew McConaughey for women to find them sexy and to want to see them naked. But there is a certain allure to rippling abs, strong thighs and loaded guns that the comedic stripteases of unemployed steel workers just doesn’t have…

Dodai Stewart writes for Jezebel of the hollering and hooting in the cinema when she went to get her Channing fix, while I noticed more of a silent sexual tension in the air. There was nary a squeal of approval throughout, which lent a certain palpability that watching a sex scene with your parents or a potential love interest might elicit. Tatum’s dance moves succeeded in getting me and—if all the mute leg-crossing, uncrossing and squirming in seats was any indication—all the other red-blooded, presumably straight women in the audience hot under the collar. As Stewart continues, “Could it be that women are so used to seeing the female body sexualised on screen—from the point of view of the male gaze—that we don’t even know how to react to the sexualised male body?”

It seems that the characters who are virgins to the Tampa male stripping scene don’t know how to react either, with Alex Pettyfer’s portrayal of Adam consisting of equal parts disgust at Mike’s occupation and awe at the perks of his lifestyle. Adam’s sister, Brooke (played by Cody Horn), is closed in on by the camera when she first sees Mike dance and a range of emotions cross her face: judgement, arousal, amazement, discomfort at the role reversal male strippers provide. Discomfort and concern are also expressed by the bank clerk when Mike attempts to get a loan, showing up with a down payment in wads of ones and fives. Presumably the teller recognises Mike from the male revue, and offers to sign him up to a program for “distressed” clients, inferring that because he gets his kit off for money, he must be either strapped for cash or lacking self-esteem. Hmm, where have we heard this before? Usually directed at women who trade on their looks and are deemed “at risk”, “battered” and, yes, “distressed” as a result. Mike even has to resort to the ol’ spectacles trope to be taken seriously as he enters the bank, an action most often utilised by hot chicks who want to appear smarter. Speaking of hot chicks, in another play on man as sexual object, Mike’s lover, Joanna (Olivia Munn), tells him she doesn’t want to talk about his feelings: “just look pretty”.

With all the double standards that come with being a male stripper in Magic Mike—female adoration, money, drugs—Caroline Heldman at Sociological Images wonders why this kind of “stripping as fantasy life” attitude would never be seen in media about female stripping: because Magic Mike still panders greatly to male sexuality.

Indeed, there is no full frontal male nudity in the film (does a stunt penis in an enlarging device count?!), however Munn and the actress who plays stripper Ken’s (Matt Bomer) wife have their breasts on show, as well as several other female nude scenes. When it comes to the penis, it would seem that it is the last taboo, not male stripping.

That Tatum’s penis ever so briefly flashed onscreen during a bedroom scene means there’s hope for a full-frontal peen shot yet, with Magic Mike 2 on the horizon. You’ll notice that most of the male stars of the films’ careers have thrived on the comidification of their bodies. McConaughey is more recognisable with his shirt off than on and Manganiello has been quoted as saying he “could care less” about being typecast as a beefcake. I find it kind of refreshing that men are wanting to show off their bodies in a way that has been traditionally reserved for women.

For those who cry “hypocrite” at the women who’re now wolf whistling at the screen, as if all women find the sexualisation of their bodies oppressive, I direct you to one of the core tenents of feminism: choice. If women are deemed autonomous enough to make their own decisions about their bodies and whether they want to use them as a commodity, it stands to reason that men are, too. It might be a hard concept to grasp, but after centuries of the ingrained objectification of women, perhaps men want to try their hand at being desired as opposed to desiring.

While the mainstream media still has a ways to go towards female sexual liberation and the refocusing of the gaze onto men and away from women in a way that benefits all parties and exploits none, Magic Mike is a step in the right direction.

Elsewhere: [TheVine] The Rise of the Hunk.

[Musings of an Inappropriate Woman] On #DailyWife & Writing for the “Women’s Pages”.

[Jezebel] Magic Mike, Junk in the Face & the Female Gaze.

[The Frisky] 12 Famous Women Who’ve Used Their Sexuality (to Get Ahead). 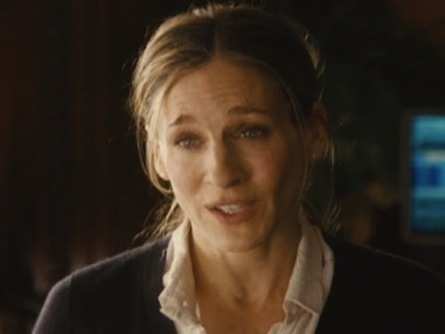 Even though I’m still young and don’t have a potential baby daddy on the horizon, I’ve been contemplating children lately. How many I want, whether they’ll be biological or adopted, and how I’m going to handle (a) tiny human(s) demanding my attention 24/7. I just don’t know how parents do it!

In this day and age, with the rise of the stay-at-home dad, it’s not always the mothers’ responsibility to look after the home, the family and her workplace.

I Don’t Know How She Does It would have you think otherwise, though. Sarah Jessica Parker’s Kate Reddy is a high-flying investment banker who has a nanny during the day, but tries to spend as much time as she can with “the cutest guy she knows”, her husband, played by Greg Kinnear, and her two kids. I got the feeling that she never slept (the constant list making in bed at all hours of the night probably lent itself to this), was a walking zombie, spent minimal time with her husband and kids, spent her weekends hosting kids’ birthday parties and never had a spare moment for herself. If this is what motherhood and family life is like, I’m withdrawing my application.

But it’s not just the “out of touch”-ness of IDKHSDI, as Dana Stevens called it in her Slate review (my friend, Tess, who I went to see the movie with, drew ire with Kate’s “chronic over-apologising” and “persecution complex”, and I have to say I agree), nor the unrealistic and polar opposite portrayal of stay-at-home mums (Busy Phillips’ character, Wendy, attends the gym from 8am to 2pm every school day. My mum was a stay-at-home one and I can tell you THAT JUST DOES NOT HAPPEN! I’m insulted on behalf of housewives everywhere.) that infuriated me. It was the blatant pro-life message the film pushed.

Kate’s junior co-worker, Momo, played brilliantly by Olivia Munn, was all about work, with some occasional no-strings-attached sex to balance it out. Momo is socially awkward, hates children, and thinks Kate’s family compromises her ability to do her job.

So when Momo finds out she’s pregnant and tells Kate she’s going to “take care of it”, Kate launches into a “creepy pro-life proselytisation”. In the next scene, Momo is keeping the baby. If that’s not a unabashed punishment for a young, attractive woman enjoying sex without commitment, I don’t know what is.

As Irin Carmon puts it, “… Why, if having a choice was so awesome, the young woman in the movie couldn’t have made another one. You know, the one she convincingly would have wanted to make.”

Elsewhere: [Slate] I Don’t Know How She Does It Reviewed: Sarah Jessica Parker Rides the Rapids of Upper-Middle-Class Parenthood. 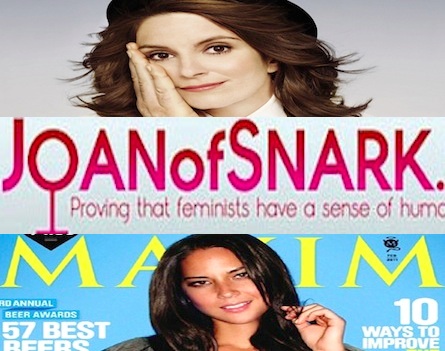 From “Tina Fey on the Message of 30 Rock’s ‘Joan of Snark’ Episode” by Margaret Hartmann on Jezebel:

“That story [the controversy surrounding hottie Olivia Munn’s hiring by The Daily Show] is so loaded and complex that I was really glad that we did it and I think it has confused and sort of delighted the internet in a way because it sort of opens up more questions than it answers. For me it was about Liz is in the wrong. She thinks she’s doing the right thing by trying to correct this woman, by trying to say ‘you don’t have to be this way’ and at the same time, this girl has every right to be whoever she wants …

“It’s just such a tangled-up issue, the way that women present themselves—whether or not they choose to, as I say, put their thumbs in their panties on the cover of Maxim, and the way women judge each other back and forth for it. It’s a complicated issue, and we didn’t go much further saying anything about it other than to say, ‘Yeah, it’s a complicated issue and we’re all kind of figuring it out as we go.’

“In the episode we have a fake website, that we’re referring to a feminist website called JoanOfSnark.com that the women at Jezebel.com immediately recognized that it was their website basically. And it was a reaction to the way I saw Olivia Munn … treated on The Daily Show.

“… I don’t have the answer, but I find it interesting. That’s all I can say. I find it interesting that Olivia gets people who go after her sometimes on these sites—because she’s beautiful, I think is part of it. I think if she were kind of an aggressive, heavier girl with a Le Tigre mustache posing in her underpants, people would be like, ‘That’s amazing. Good for you.’ But because she is very beautiful, people are like, ‘You’re using that.’ It’s just a mess! We can’t figure it out.”

“Since Fey is probably the most prominent woman in comedy today, it can be frustrating when she raises thoughtful issues, then throws her hands up and says she just doesn’t know where she stands. It also seems she missed an important part of the discussion. People didn’t question Munn’s place on The Daily Show because attractive women can’t do comedy, but because she’s not particularly funny.”

Elsewhere: [Jezebel] Tina Fey on the Message of 30 Rock’s ‘Joan of Snark’ Episode.