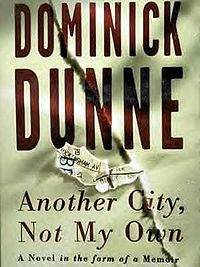 Two weeks ago I reviewed the lacklustre The Mansions of Limbo by Dominick Dunne. But as my favourite author, Dunne can do no wrong in my eyes. This time around, I’m reviewing the book that changed my life, Another City, Not My Own.

There’s nothing in particular that makes it a life changing book for probably anyone other than myself, but after I’d read it, there was no going back. I picked up the “novel in the form of a memoir” in mid 2009 after reading O.J. Simpson’s confessional, If I Did It. I had become fascinated and obsessed with the case, and Dunne’s commentary in the afterword was my first encounter with the famous name dropper.

I’m sure I Wikied him, as I do all new authors and books I come across to better familiarise myself with their writing and whether I want to commit to a book by them, and found out that Dunne was a Hollywood producer whose drug and alcohol fuelled lifestyle caused his wife to divorced him and the industry to shun him. Dunne became a recluse, penning his first New York Times Bestseller, The Winners, in a cabin in Oregon.

The murder of his daughter, Poltergeist star Dominique Dunne, and the subsequent “slap on the wrist” her killer—and boyfriend—received drew Dunne out of the woodwork and into the public glare once again. He became an advocate for victims rights and justice brought against rich and famous offenders, covering such high-profile cases as the trial of Claus von Bülow, charged with attempted murder as his estranged wife Sunny lay in a vegetative state after an alleged insulin overdose; Kennedy relatives Michael Skakel and William Kennedy Smith, serving time for the murder of teenage neighbour Martha Moxley (on which the 1993 novel, A Season in Purgatory, is based) and acquitted of rape charges, respectively; the Menedez murders; and, of course, the O.J. Simpson trial, for Vanity Fair. I could not get enough of his storied history and fascinating accounts of the dark side of Hollywood.

Another City, Not My Own chronicles Dunne’s alter ego Gus Bailey’s return from New York back to the city that ruined his life, Los Angeles, for the murder trial of O.J. Simpson. It’s hard to tell what’s real and what’s fictionalised (Dunne’s real son Griffin is now Bailey’s son Grafton; A Season in Purgatory is the narrator’s book-turned-miniseries), and such famous names as Elizabeth Taylor, Frank Sinatra, the Spellings, Michael Jackson and Heidi Fleiss make guest appearances, if only in the form of dinner table gossip fodder. In addition, the larger-than-life main players, O.J., Nicole Brown Simpson, the Goldman family, Kim, Khloe and Kourtney’s dead daddy Robert Kardashian, pool boy Kato Kaelin, racist cop Mark Furhman, Nicole’s drug addicted friend, Faye Resnick, and super-lawyers, prosecutor Marcia Clark, and the arrogant Johnnie Cochran for the defence, make Another City, Not My Own read like a salacious gossip mag or blockbuster movie.

This book boats a twist, turn and pop culture reference on every page, making your eyes race to keep up as your mind tries to savour the action, because once you’ve read the shock ending, which links to another high profile ’90s murder, there’s no going back.

Related: The Mansions of Limbo by Dominick Dunne Review.