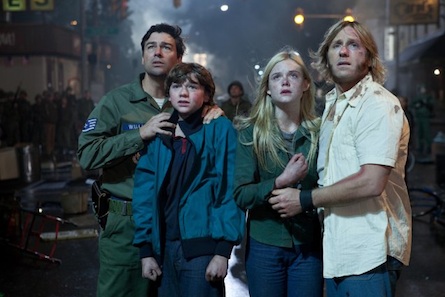 E.T. meets Tomorrow, When the War Began meets Signs meets The Goonies. That’s how I would describe Super 8.

Going into it on Tuesday night, I didn’t have much of a clue what the Steven Spielberg-produced, J. J. Abrams-written-and-directed effort, named for the type of film used in the late 1970s, was about. I saw a review in Who that looked promising, and I was intrigued by the almost all-kid cast.

The alien aspect, which is introduced when the kids are filming a zombie movie over the summer and they witness a purposeful train derailment, is neither here nor there to the actual story, which is a “coming of age” tale of Joe Lamb, whose mother died in a workplace accident a few months prior.

Joe’s dad, the town deputy, is struggling to deal with the death of his wife and being a more present father to Joe than before the accident. He holds a grudge against the man whose shift his wife took the day of her death, who just so happens to be Joe’s friend Alice’s drunk father. Joe and Alice are forbidden from seeing each other, but that doesn’t stop them from working together on their friend Charles’ Super 8 film about zombies, the full version of which can be seen in the credits.

After the train derailment, which is caught on film by the kids, they seek out the truck that caused the accident, driven by their biology teacher, Dr. Woodward. He tells the kids not to mention a word of the accident to anyone or risk death.

Strange things start happening in the town, like abductions, lost dogs and power lines disappearing into thin air. My friend Eddie had the theory that the “alien aspect” had something to do with the Soviet space dogs used in experiments in the 1950s and ’60s. Personally, I liked this notion very much, but it wasn’t to be.

I’m not a big fan of supernatural films, especially those with aliens, and some parts of the movie were scarier than I expected. In all honesty, the movie could have done better to not be centered around aliens.

The kids and Deputy Lamb independently piece together the mystery as the Air Force arrives in the town for the clean-up. Dr. Woodward has been killed by Colonel Nelec, the man in charge of the investigation, when he didn’t offer up the information they wanted.

The kids break into the school to access Woodward’s files, which reveal him as a researcher with the Air Force in 1958, when an extraterrestrial crashed on Earth. The government captured and tortured the creature in an effort to understand more about it. Woodward was empathetic to the alien’s plight, and wanted to set it free so it could return to its home planet. That’s what he was doing on the train tracks that night.

The E.T. parts of the film got a bit convoluted at times, and my friend Sallie commented on aspects of the storyline that didn’t add up.

But the inclusion of the endearing troupe of kids and their adventures made up for any inconsistencies. Think Stand By Me, but with aliens.

Related: Who Speculates About Domestic Violence in the Affleck/Garner Household.

Tomorrow, When the War Began by John Marsden Review. 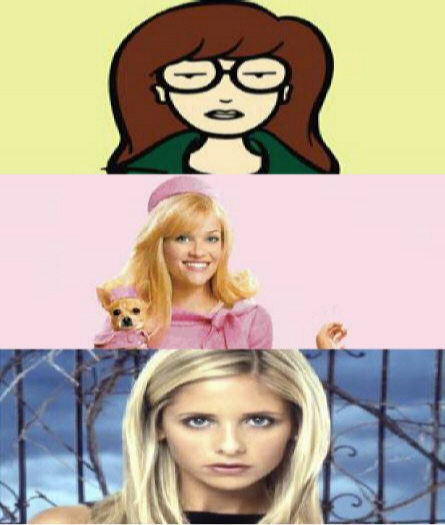 This is an edited version of an article originally posted on Girl with a Satchel.

Magazines and media blogger Erica Bartle, of Girl with a Satchel, has recently upped her workload as feature writing and fashion and style journalism tutor at Queensland’s University of Technology. Erica’s first lecture inspired her to write this:

After experiencing some minor audiovisual issues (during which time I had a little jokey internal monologue with Tina Fey in Date Night about the “computer sticky thingy”) and giving my introductory lecture on feature writing on Monday, I opened up the opportunity for questions.

“Are you going to be referencing Sex and the City every lecture?” deadpanned one male student channelling Daria. Touché!

I actually hadn’t intended to make reference to the show (in fact, I genuinely try to curb such things, knowing how tiresome it can sound), but sometimes a pop culture reference comes to mind that fits the occasion aptly enough to illustrate a point and simply must be voiced (cue the scene in Sex and the City when Candice Burgen, playing Carrie’s Vogue editor, returns her piece on shoes dripping with red ink).

Though more “serious journalists” prefer witty literary/historical/political references and high-brow in-jokes, I love a good pop culture reference in a feature; preferably if it’s Gen-Y nostalgic. It says, “you speak my language”. Gillard and Abbott (or, rather, their speech writers) should really think about throwing some random Simpsons/Mad Men quotes into the mix (okay, it didn’t work for Joe Hockey!).

Give me Seinfeld, give me slinkies, give me scrunchies, give me The Goonies and Gilmore Girls and I’m yours. As Elle Woods once said, “Exercise gives you endorphins. Endorphins make you happy”. So does good pop culture. And puppies.

So who better to inspire the writer’s muse—that voice that sits upon your shoulder like trusty Tinkerbell—than some of the feisty and fabulous gals you pointed to in response to the pop popularity poll? Make like Buffy Summers who “slew all manner of demons and even had breath to spare for puns and quips”.

Elsewhere: [Girl with a Satchel] Women of Pop Culture & the Unashamed Use of Cutesy Clichés.