This article originally appeared in The Tag Rope Issue 6. Republished with permission.

Women’s wrestling has experienced a resurgence of sorts over the past couple of years, arguably initially spearheaded by the popularity of Total Divas. The E! reality show, which aims at giving fans a better look at the lives of eight World Wrestling Entertainment Divas—along with the increasingly positive portrayal of and dedication shown to Divas-in-training in WWE’s developmental brand, NXT—perhaps contributed to the trending of #GiveDivasaChance on social media earlier in the year. The hashtag, along with #WomensWrestling and #DivasRevolution, continues to urge WWE management to give their cohort of women’s wrestlers more than five minutes of match time per three-hour episode of Raw, and furthers the apparent change in the characterisation of Divas as “former fitness models and Playboy Playmates”, as Grantland writer David Shoemaker put it, to the talent athletes they are.

But what exactly is a Diva?

The term surfaced around the late nineties and was officially uttered for the first time in 1999 by Sable, however fan favourite Sunny later claimed that her revolution of the role of women in wrestling meant that she was “The Original Diva”. (Sunny has since defamed the current crop of Divas on social media, saying she’s “never been a fan of womens [sic] wrestling”.) While the word is often used to describe difficult women (read: assertive women who know what they want and refuse to be treated like crap), in this context it is simply WWE’s adjective for their female wrestlers (sorry, “sports entertainers”).

Some of the best-known former Divas, Trish Stratus and Lita, have said multiple times that they don’t identify with the moniker “Diva”, though. Lita told WWE Superstar Chris Jericho on his podcast, Talk is Jericho, that she feels it’s another term for “window dressing” and that—“not to be sexist”—she was always “thinking like a guy” in the ring as opposed to worrying about how hot she looked. Stratus reiterated this notion of a Diva as a “sideshow” term when she spoke to wrestling announcer, Jim Ross, on The Ross Report:

“We get it: you’re beautiful and you’re a woman. Great, now let’s get in the ring. Let’s be athletes.”

Lita and Stratus were instrumental in changing the notion of what it means to be a women’s wrestler. Both wrestled in the first ever one-on-one women’s main event to close Raw in 2004 (not including Lita VS. Stephanie McMahon for the WWE Women’s Championship in 2000 in which, as Lita puts it, they had male “props” including The Rock as special guest referee and McMahon’s on-screen and real-life husband, Triple H, at ringside). Lita also wrestled in WWE’s first ever women’s cage match and was part of the highest rated Raw segment in the show’s then thirteen-year history in 2006. (Let it be known that this segment was marketed as a “live sex celebration” in which Lita was topless but her breasts concealed from view so it probably isn’t an exemplar of gender barriers being broken.)

Come 2004, the WWE Diva Search—a reality competition that took place during Raw and in which wrestling fans could vote and which is apparently returning to WWE programming later this year—was introduced and many of the Divas began posing nude for Playboy in a period that became known more for promoting the Divas’ looks over their in-ring abilities. Former WWE Diva and two-time Playboy cover girl Torrie Wilson made reference to the ubiquity of bikini contests and bra and panties matches she was required to perform in on The Ross Report during this time.

These days, in the “PG-era”, Divas Brie and Nikki Bella, Nattie, Eva Marie, Paige, Trinity and Alicia Fox have their own hour-long reality show, Total Divas. Seeking to capitalise on the 35% female viewership of WWE’s traditional wrestling shows including Raw, SmackDown!, and the myriad of other weekly shows on the WWE’s online, on-demand network, it’s no surprise that Total Divas airs on E!, a channel whose primary audience is 65% female.

Traditional reality TV tropes have been at play on Total Divas, which at times only marginally passes the Bechdel test (at least two named women who speak to each other about something other than men) and casts “bad girl” Eva Marie in the role of the temptress bitch who comes between the other Divas; the other Divas and their men; and the other Divas and their aspirations to climb the wrestling ladder. This season though, the show has increasingly highlighted its stars’ careers amidst the #GiveDivasaChance movement that has evolved into a #DivasRevolution. Eva Marie finally put in the work in the ring; Nattie updated her gimmick from wholesome sweetheart to black-clad dominatrix; and Nikki Bella decided to stay with WWE and “continue to help women conquer this industry”. Total Divas is still reality TV after all, so rote catfights still take pride of place, but at least the women are fighting about their careers and livelihoods and not men as in seasons past.

Maybe because it doesn’t deviate too far from E!’s formula, the mainstream has responded well to Total Divas: its first season averaged 1.3 million viewers in the all-important 18-34 demographic with the highest season premiere of 2013. Due in part to its success, along with the WWE audience’s agitation on social media, the #DivasRevolution is taking steps to elevate women wrestlers from the way they’ve been portrayed for much of the past decade.

In 2013, for example, the Divas tag team match at WrestleMania got cut due to time restraints; the 2014 event’s obligatory women’s match was an invitational battle royal featuring fourteen Divas vying for the sparkly pink butterfly-shaped Diva’s Championship; and this year’s WrestleMania 31 tag team Divas match only went for 6:40 minutes on a four-hour show. As Lita told Stone Cold Steve Austin on his podcast, “It seems like you don’t see a lot of them until it’s a big free for all and you don’t even know what’s going on.” It would stand to reason that if WWE is promoting the Divas to a mainstream audience, they would want to showcase them as much as possible in order to lure those E! viewers over to the larger WWE product.

It seems the company finally cottoned on to that notion with the #DivasRevolution taking place on the July 13th Raw that saw NXT trail blazers Charlotte, Becky Lynch and then-NXT Women’s Champion Sasha Banks dominate the other Divas with their submission moves as the live audience hollered “this is awesome!”, a chant usually reserved for high risk stunts in men’s matches. Since then, WWE has at least paid lip service to the apparent “revolution”, with subsequent Raw and SmackDown!’s featuring multiple Divas matches often spanning numerous segments, a marked improvement on the 30 second Raw tag team fare (is 30 seconds even long enough to get a tag in?!) that sparked #GiveDivasaChance in February. A champion vs. champion match between Nikki Bella and Sasha Banks even technically main evented the final Raw before SummerSlam. (This is not to mention its spot on the card right before Brock Lesnar’s homecoming in Minneapolis and the lack of relevant hype surrounding the match.)

Perhaps the most obvious disconnect between the revolution in theory and in practice can be seen in Sasha Banks and Bayley’s meeting at NXT Takeover: Brooklyn for the brand’s women’s championship in what was the match of the night and maybe even 2015. Stephanie McMahon (whose character thinks of herself as the arbiter of the revolution) made sure to announce that it was the semi-main event while smarks scoffed at WWE’s hypocrisy.

In Lita and Stratus’ heyday women arguably played a more integral role in the product, such as in intergender matches in which women wrestle men. “Intergender matches were some of my favourite matches to be a part of. There’s [sic] just so many elements: sexual elements, comedy elements and you can also be a real badass interacting with the dudes [on a level which] you don’t normally get to interact,” Lita told Ross.

The argument could be made that men wrestling women normalises violence against them. On the other hand, feminism works to promote the idea that all genders are equal so therefore, if a woman can physically match a man (*cough* Charlotte *cough*), then it makes sense that they would compete. The tag team of Joey Ryan and Candice LeRae are an example on this on the indies. In wider society, the abolishment of gender restrictions in combat roles in the military reflects this notion (the actual uptake of women in these roles leaves much to be desired, though).

One of women’s wrestling most influential pioneers is Joanie Laurer, better known as Chyna. She was the first woman to compete in the all-men Royal Rumble match, the first woman to hold a men’s championship and the woman who made it widely acceptable for women to wrestle men. Following her WWE departure in 2001, Laurer’s tumultuous personal life—including a high profile stint in (Celebrity) rehab, an abusive relationship and a sex tape that she parlayed into a porn career—has prevented her from getting the professional recognition she deserves. In an upcoming documentary funded through Kickstarter entitled The Reconstruction of Chyna, Laurer will attempt to tell her side of the story. She’s also undertaking a social media campaign to get inducted into the WWE Hall of Fame.

Total Divas’ reality TV predecessors, such as The Hills, Keeping Up with the Kardashians and The Real Housewives, predictably portray women as dramatic layabouts who are famous for being famous. Though you wouldn’t think it from Total Divas’ past focus on the personal dramas of its cast, female wrestlers are the antithesis of this, putting their bodies on the line whenever they’re given the opportunity to do so. Matches such as Sasha and Bayley’s Takeover clinic prove this. If WWE and Total Divas can look beyond characterising women as eye candy without any discernible motivations and instead focus on healthy competition between women who respect each other but also strive to beat each other (again, as with Takeover’s four horsewomen curtain call), only then can Divas truly be given a chance.

Elsewhere: [Grantland] What We Learned From WrestleMania 31: Notes on an Event That Could Be Remembered as One of the Best in WWE History.

[TV By the Numbers] E! Delivers 20% Year on Year Growth in Primetime Among Adults 18-49 in Primetime During Fourth Quarter.

[Wikipedia] Women in the Military.

[Kickstarter] The Reconstruction of Chyna.

Every year a token C-list celebrity is brought in to liven up the place and promote World Wrestling Entertainment to a wider audience. Somehow I think Jersey Shore’s target audience might already be WWE watchers… Just a thought!

But Snooki was actually very athletic, and ended up winning the match for her team, including legendary Diva Trish Stratus and John Morrison, against Michelle McCool, Layla and Dolph Ziggler.

In other wrestling meets reality news, Jenni “JWoww” Farley in apparently training to be a wrestler on WWE’s rival brand, TNA, on which Jersey Shore reject, Angelina, has already appeared! 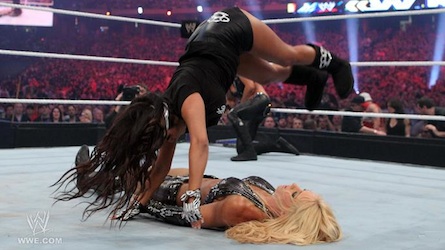 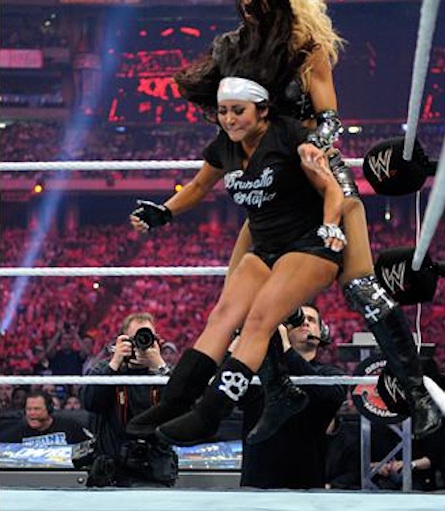