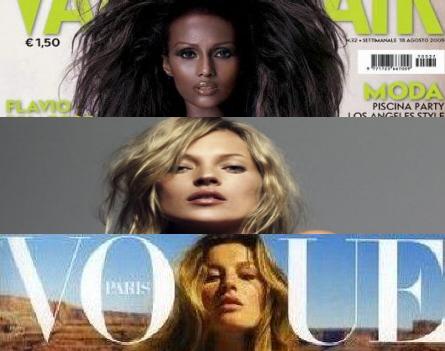 I’ve been meaning to visit Modelinia for a while now, and their History of Models timeline got me thinking about beauty norms across the ages since models became mainstream. Modelinia’s timeline begins in 1928 and follows the top faces (and bodies—hello, Elle “The Body” McPherson), such as Twiggy, Iman and Lauren Hutton, through to today’s most famous faces.

Modelinia’s timeline begins with society girls like Dorian Leigh, who was perhaps the “world’s first supermodel” and appeared on the cover of Vogue seven times in 1944 and earned $300,000, “an amount that was unheard of during that time”. Leigh’s partnership with famed photographer Richard Avedon paved the way for future “model as muse” photographer-model dynamics. Leigh was also one of the models who inspired the classic, Breakfast at Tiffany’s.

The late 1940s and ’50s ushered in the age of “Hollywood glamour”, when Leigh appeared on Broadway in The Fifth Season, and “Million Dollar Baby” Lisa Fonssagrives married photographer Irving Penn. These women also proved there was life after modelling, with Fonssagrives “designing a line of leisurewear for Lord & Taylor”, and Leigh opening her own modelling school in Paris, much like Tyra Banks and Heidi Klum today.

The period beginning in 1960 was known as the “awakening” and spawned the births of McPherson, Linda Evangelista, Paulina Porizkova, Cindy Crawford, Stephanie Seymour, Christie Turlington, and Naomi Campbell, the women who would later become known as the über-models of the ’90s.

The ’60s were the years of Twiggy, whose picture was discovered hanging in a hairdresser’s window, and in 1965 she appeared on the cover of Vogue in three separate countries, landing the American edition thrice. She was also the subject of three separate documentaries that year, following on from her radio debut, with the single “Beautiful Dream” in 1964.

Around this time, Hutton refused to close the gap in her teeth, paving the way for the gap-toothed everywhere, like Madonna and Aussie model Jessica Hart.

It was a period of firsts for Hutton, which carried over into the ’70s, who was the first model to front a fragrance campaign, the first to sign an “exclusive cosmetics contract” and the first to reach $1 million in earnings.

The days of disco saw the birth days of the second wave of ü ber-models, like Klum, Shalom Harlow, Banks, Kate Moss, and Laetitia Casta, and the juxtapositioning of the all-American girl next door, Christie Brinkley, with the exotic beauty of Iman. In 1974, Brinkley signed a cosmetics contract with Covergirl, which resulted in a 20-year partnership. Iman served as muse for Yves Saint Laurent, who released his African Queen collection in 1978. While Brinkley appeared on the cover of Sports Illustrated Swimsuit Edition three years in a row (1977–1979), Iman proved she has commercial appeal, fronting “the June cover of Italian Cosmopolitan” in 1978.

The era of the “poster girl” (commencing with Brinkley’s aforementioned Sports Illustrated cover in 1987 and culminating in the permeation of models in the mainstream) sees models on the covers of all major magazines, from Life to Cosmo to Vogue to Playboy.

And if the saturation of popular culture in the ’80s seemed extreme, the ’90s sought to solidify this with “the rise of the supermodel”, coinciding with “the waif” ideal popularised by Moss’s “heroin chic” look (or as we would find out in 2005, cocaine chic), which was perhaps named for Calvin Klein’s Heroin Kids campaign, which Moss fronted in 1994 .

George Michael’s classic Freedom ’90 featured a bevy of supermodels, including Crawford, Turlington, Campbell, Evangelista, and Tatjana Patitz, in 1988. To accompany this, said models appeared on the cover of British Vogue, followed by the iconic group runway walk for Versace in 1989. 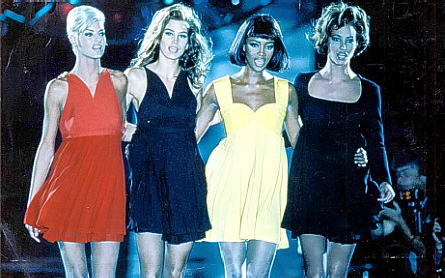 The rapid rise of Seymour began in 1989, when she appeared nude in Playboy, began dating Axl Rose of Guns N’ Roses and appeared in their “Don’t Cry” video clip, followed by “November Rain”. She became the first major model to sign with lingerie empire Victoria’s Secret in 1990, followed by her runway debut for Valentino.

It is interesting to note that the über-models of this time worked primarily in beauty campaigns and magazines before debuting on the runway, whereas now it’s the other way around. There are a lot of nameless and faceless models who walk on the runways and act solely as “clothes hangers” for the garments. It is rare that a model will move beyond that tag and permeate the zeitgeist, but those who have include Gisele Bündchen, Agyness Deyn, Daria Werbowy and Miranda Kerr.

Crawford’s star also rose even higher during this period, with her marriage to Richard Gere and her constant presence on magazines cover of all kinds, including a sexy 1991 cover of Vanity Fair, in which a bathing suit-clad Crawford shaves k.d. lang in a barbers chair.

But Crawford had some competition rapidly rising alongside her: Moss. In 1991, Moss fronted the Calvin Klein Obsession for Men campaign, as well as the Calvin Klein jeans ad together with Mark Wahlberg.

1992 was also a year for sexy magazine covers, with Seymour gracing Playboy for a second time, and McPherson making her debut for the magazine.

In other mag news, Crawford was asked to posed for the cover of the groundbreaking first edition of John F. Kennedy Jr.’s publication, George, as—who else?—George Washington. 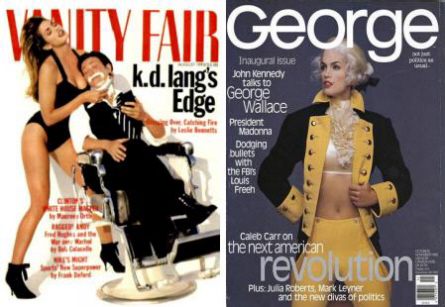 1994–1995 was surely Harlow’s time, as she added to her resume of film roles in In & Out, as well as gracing the cover of February W, March’s Paris Vogue, and June Harper’s Bazaar US in 1994, and March W, and December Vogue with fellow model-turned-actress, Amber Valetta.

That year Banks appeared on the cover of Sports Illustrated Swimsuit Edition, the first black model to do so solo. 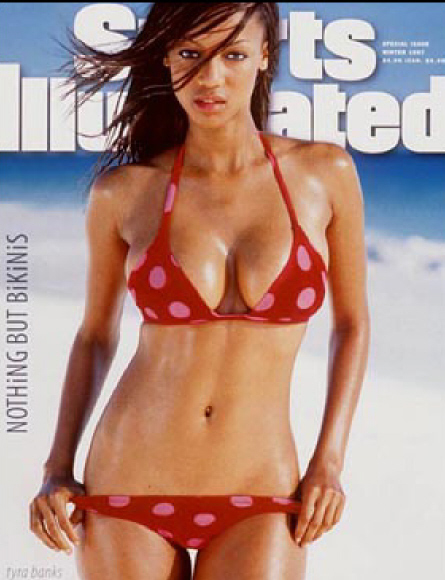 With Bündchen’s appointment to Vogue cover girl in July 1997 the “heroin chic” era allegedly ended, and the championing of healthy bodies like Bündchen’s began. Maybe in the modelling world, but the “heroin chic” movement has wrecked havoc on the notions of beauty, body image and popular culture.

On a side note, recently Playboy.com profiled the changing of women’s breasts over the years, and Jezebel was quick to counter that its not our breasts that have changed, but the media’s—ie. Playboy—belief of what they should look like (NSFW). It is not dissimilar in the case of beauty magazines aimed at women.

By the turn of the millennium, the age of the supermodel subsided, which was noticeable on magazine covers across the world, which began to, and still do, feature actresses and singers on their covers.

With the retirement of the most beautiful faces and bodies in the business, models almost ceased to be relevant, and women who made achievements for something other than their looks were championed. Obviously, there is still a large gap between women on magazines and television and in advertising campaigns and movies in correspondence to how they look rather than what they do, but looking back on the dominance of beauty in the ’80s and ’90s, we are slowly starting to celebrate diversity.

In addition, there’s the whirlwind surrounding plus-sized model Crystal Renn (is she plus-sized, isn’t she plus-sized?), and the model as somewhat of a prop for photographers, magazine editors and designers making a statement, as seen on Evangelista’s November 2009 cover for W magazine’s “The Art Issue”, or Claudia Schiffer (who, interestingly, was not featured in Modelinia’s timeline) and Karl Lagerfeld’s collaboration. 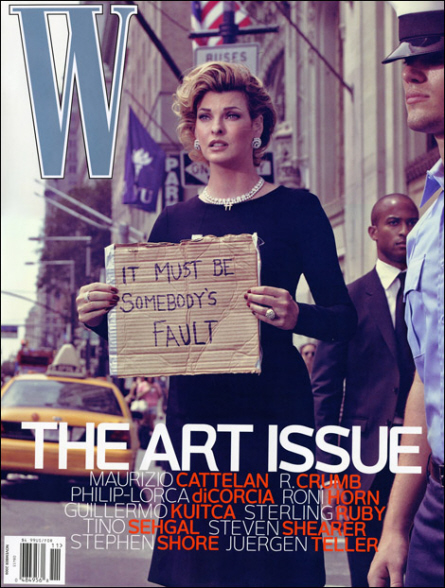 While it’s always nice to look a somethingone beautiful, it’s also nice to realise that there should be more to a model than what she looks like, and in a lot of cases, there is.

You only need to look at the aforementioned Banks and Klum’s careers in television (America’s Next Top Model and The Tyra Banks Show, and Project Runway and Germany’s Next Top Model, respectively), Erin Wasson’s foray into designing, and Kerr’s championing of a healthier life to see this in practice.