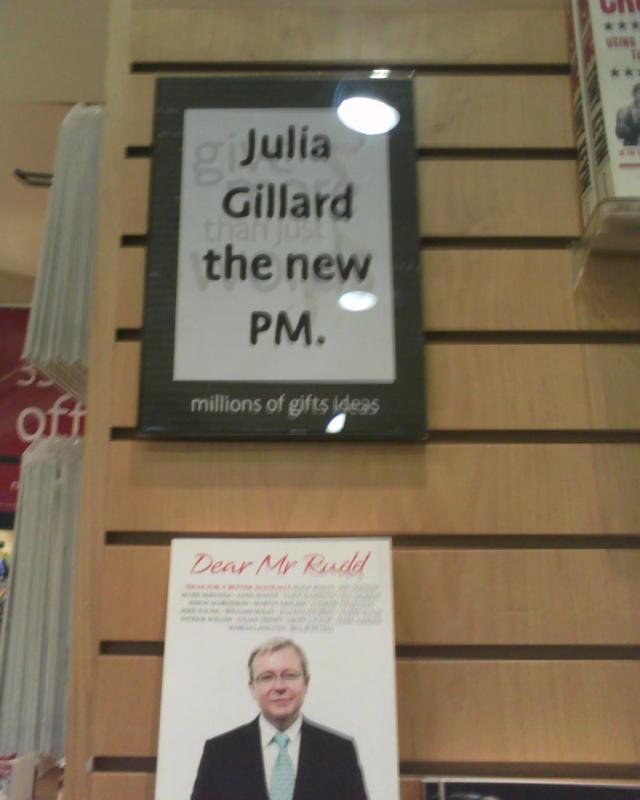 Some frequent readers of this blog asked my why I haven’t posted anything about our new Prime Minister, Julia Gillard. Not only is she the first female leader of our country (our version of what Hillary Clinton could have been, if you will?), but it was a newsworthy event for the fact that Kevin Rudd was ousted during his first term, despite that it was by a woman.

There has been a lot of hoo-hah about Gillard apparently stabbing Rudd in the back and lying to him that she would never take his place. Sure, she may have lied, but who hasn’t? And when the fate of an entire country lies in incompetent hands (not all that incompetent, if you ask me), sometimes the ladies have gotta take matters into their own.

However, that step doesn’t extend to the gays, as Gillard is just another (mostly) forward-thinking liberal (in the true sense of the word, not our country’s warped sense of what that means politically) who opposes gay marriage.

Apparently, it is her “personal view,” however my personal view is that she probably doesn’t want to ruffle more feathers than she already has within the first week of her appointment to PM, as opposed to truly believing “the marriage act being appropriate in its current form.”

It is also my personal view that opposing gay marriage is one big black mark against Gillard’s mostly positive repertoire.

Elsewhere: [Musings of an Inappropriate Woman] Four Articles I’d Like to Read on Julia Gillard, K-Rudd & “the Spill”.

3 thoughts on “Sisters Are Doing it for Themselves… But Not the Gays.”