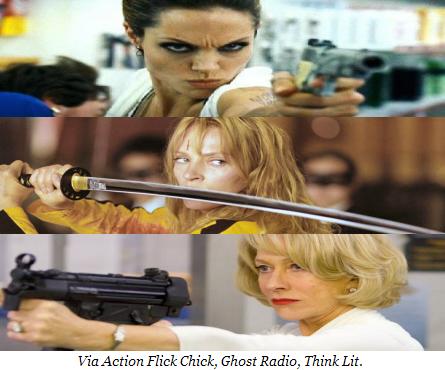 From “Is Female-on-Male Violence on the Rise?” by Lynn Harris:

“… ‘we are fascinated by girls’ and women’s violence’. For those who like to see women—Angelina Jolie, even Helen Mirren—wielding serious, even heretofore forbidden, power, it’s hot. For those who fear women in that role, it’s… not. ‘For all the increased tolerance, even celebration, of aggressive women in pop culture, in daily life there’s still a lot of disapproval of women even speaking up at meetings or asking for a raise, let alone committing a physically aggressive act,’…”

Related: “With a Gun Between Her Legs”—Why “Strong” (AKA “Sexy” Whilst Being “Strong”) Female Characters Are Bad for Women.

Elsewhere: [Salon] Is Female-on-Male Violence on the Rise?