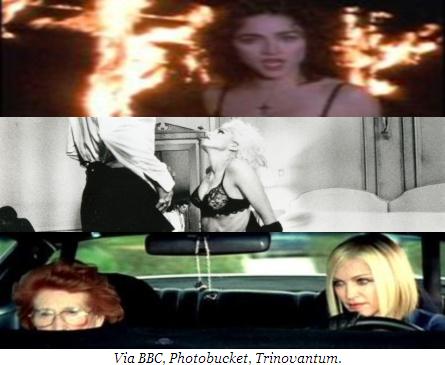 A revised version of a third year media studies group presentation on obscenity and race in Madonna’s music, and more specifically, her music videos:

Our topic is “Pop Music, Obscenity and Race”, and we chose to speak about Madonna, and her controversial career in music and as a pop culture icon. While the reading, “Expert Witnesses and the Case of Rap” by Houston A. Baker, Jr., is more about rap music and the 1990s rap group 2 Live Crew, we have taken some aspects of the article and applied them to Madonna’s works.

“Like a Prayer” depicts images such as an attack on a woman in an alley, burning crosses, stigmata, Madonna’s revealing outfit as she sings in a church, and her love affair with the black Saint Martin de Porres, who some have interpreted as being a black Jesus Christ. Here she deals not only with race, but also religion.

One of Madonna’s most controversial and heavily censored videos is “Justify My Love”, in which Madonna and the actors in the clip engage in sadomasochism, bondage, domination, voyeurism, same-sex and group-sex relations, cross-dressing and possibly prostitution. Baker, Jr. speaks of voyeurism in the reading, and relates it to the fact that such taboo subject matter in videos by 2 Live Crew, and also Madonna, doesn’t allow viewers to critically and objectively view them. This leads to our focus question: “If religious groups, conservatives, feminists etc. weren’t condemning and censoring Madonna’s videos, would the public find them shocking and controversial, or at least as shocking and controversial?”

Finally, we briefly discussed Madonna’s video for “What it Feels Like for a Girl”. We personally didn’t find the video offensive or overly violent, however that was the reason given for banning it. In the video, Madonna kidnaps an old woman and goes on a crime spree with her, robbing banks and stealing cars. Madonna openly defended the video, saying that if she were a man, the violence wouldn’t be an issue, because they get away with the same or worse in their videos. Similarly, she defended the “Justify My Love” video’s content, even though the banning of it made her more money than if it was aired freely. This once again relates back to our focus question and what Baker, Jr. contends about 2 Live Crew.

Funnily enough, in an interview with Adam Lambert about his controversial same-sex kiss on-stage at the American Music Awards whilst performing “For Your Entertainment”, he got fired up how his actions were vilified because he was a man, while female pop stars have been behaving sexily since the dawn of time the music video. Hello, “Like a Virgin” at both the inaugural MTV VMAs in 1984 and with Britney and Christina in 2003!

I intended to elaborate more in this post on the points briefly mentioned here, however due to time constraints, I thought maybe I could use this post as a sort of “jumping off point to start negotiations”, as fellow Madonna-lover Cher Horowitz would say. I hope to put up more posts in the future on Madonna’s influence on the music video and religion in pop culture.

Related: Madonna (and Her Brand of “Feminism”) On the Rocks.