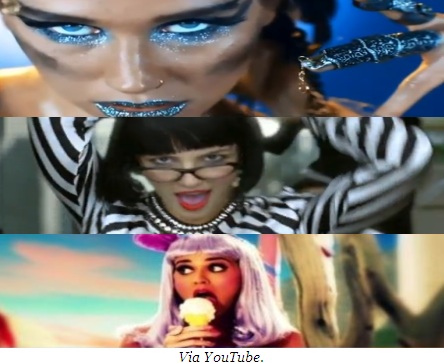 From The Quietus’ “Givin’ It to the Homegirl: The Trouble with Kelis” by Neil Kulkarni:

“I hear no shattered women on the radio right now, no one swallowing men like air or devouring worlds or commanding the cosmos or even telling the truth. Only empty-headed little girls skweeming and squeaking about what rockstars they are. Well we get the pop we deserve, the pop Fearne Cotton likes, but even if I were white skinny and pretty I’d feel lagged behind, let down, and I’d be wondering why the fuck these drippy bitches like Flo and Ke$h think they deserve to be famous. Good taste? Where’s the fucking bravery? Where’s girls like I know, rather than the girls and guys I’d cross streets, change clubs, emigrate, to avoid. If pop is a club right now, I find myself walking past all the tables packed full of braying twats and simpering saps and desperate to recognise a friendly face, a real face, smart people who are a laugh, rather than all these desperately needy, charmless loudmouth ignoramuses and fucking students.

“Look at what pop’s women are wearing. Even in Gaga’s orbit of influence, it’s so fucking dull out there. It’s as if Girl pop looks at ’30s Vogue, ’70s Cosmo, ’80s Face/ID, looks at the dress-up-games the high-street makes easy and search-free, throws shit on and waits for those old spirits to reinhabit the body beneath and the mind behind such carelessness… Those old moments of beauty, those looks so steely, timed and timeless were animated and arranged by folk who worshipped new gods, the camera and the motorcar and the mirrorball and the MDMA and that spirit cannot be conjured off-the-peg, cribbed from an idiot’s guide or splattered on with a sequin gun. [Scarlett Woman note: Or a love glue gun, as Gaga would say?]

“Which does beg the question—what real female figureheads are there for girls to idolise, aspire to, learn from in music right now? In a pop world in which female ‘presence’ is in glut/spreadthin, it’s startling how little of femme-import is being given, how so many of the supposed ‘divas’ in modern pop have now to offer young minds bar money-hunger, man-dependence and just-dumped aggravation… make the colossal strategic error of listening to the charts, and you’ll see girls talk about themselves, sure, but always ONLY in relation to their relationships, only in relation to how near/far they are from love, only in relation to how much they can lose/claw back of themselves in the permanent night-out that is pop’s sole focus and context in 2010. Crucially, whilst you’ll see lots of girls, you won’t hear a single word that dares to antagonise you, that really addresses how scarily fast and furious with innovative invective girls can be. Obvious why girls are so ill-served at the moment, why none of pop’s chat and cattiness (exceptions: Gaga, Britney and Beyonce on their good days; Shakira—all of whom crucially don’t try and talk to/for their young fans, just luxuriate in their own supra-identities) actually matches up to the way girls talk/live/think—somewhere along the line middle-aged fanboys started whispering to pop that if it wants to cut deep it must only thieve from the past the fanboys curate, that it can’t do politics, that being a poetess is less important than simply being a witty conduit for the babble of what’s contemporary, a simpering squeaker of lad-mag-friendly spunkiness. ‘I really like your beard.’ Jesus. They’re being catered for.”

Elsewhere: [The Quietus] Givin’ It to the Homegirl: The Trouble with Kelis.

One thought on “The Problem with Pop Music.”