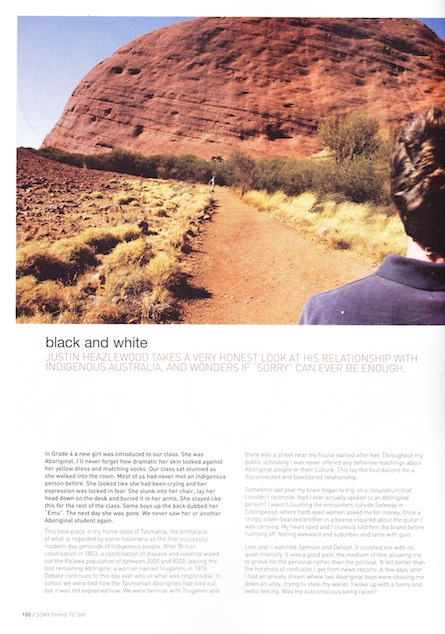 frankie’s latest edition is somewhat underwhelming, but there was one diamond in the rough: Justin Heazlewood’s “honest look at his relationship with Indigenous Australia” in “Black or White”.

I will admit that up until about two years ago when I started working in the cultural/tourism sector and really immersed myself in the Melbournian way of life, I was “a little bit racist”, as the Avenue Q song goes.

Now, I’m taken aback when friends, family members and, yes, even colleagues, express their racist views. Dare I say I’m offended on behalf of the racial minorities who are victims of racism on a daily basis. (I am primarily a white Australian, but I do have Native American heritage, and I have been the victim of latent racism on several occasions throughout my life). And there’ll be more to come on that later in the week.

Heazlewood references the homeless Aboriginals out the front of Woolworths on Smith Street in Fitzroy, who often get the short end of the stick when it comes to preconceived notions, but I was hanging out in Fitzroy last week and saw just as many drunk and intimidating bums who happened to be non-Indigenous.

But, as I discussed with a workmate over the weekend, city people are far more tolerant than country folk when it comes to race relations. I grew up in a small country town which claims to be the epicenter of Chinese immigration during the gold rush, and it certainly is. But I can only remember one indigenous kid and one Chinese kid at school… and I attended six different institutions!

It’s an interesting take on the cultural/racial gap in Australia, and probably the only reason to pick up a copy of the mag this (bi)month.