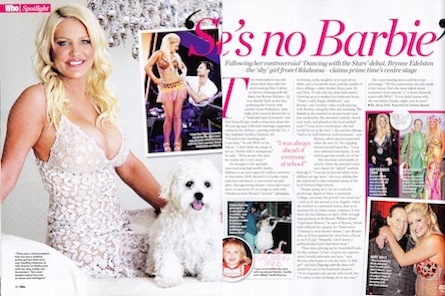 In this week’s Who magazine, Dancing with the Stars contestant Brynne Edelsten (formerly Gordon) divulges her “normal” childhood in “a modest four-bedroom home” in Oklahoma, and says that while she played with Barbies, don’t mistake her for one.

Edelsten, on the other hand, may be sweet and “shy”, but she’s got a long way to go if she wants to be viewed as someone other than Geoffrey Edelsten’s young, surgically enhanced trophy wife and un-co DWTS contestant.

Whereas Barbie is smart, confident, does dare to bare on the red carpet like Edelsten, but never looks trashy and, judging from her numerous careers in the physical field, is bodily synchronised. Then again, it’s hard not to be when you’re plastic.

Edelsten seems harmless enough, and the Who article reveals that she wants to be taken more seriously as not just Geoffrey Edelsten’s “shallow, pretty” wife.

She unbelievably survived the first elimination on DWTS; overcoming the odds. Now that’s something Barbie could relate to.

Related: Toy Story 3’s Barbie: Not as Dumb as She Looks.

Is There Really a Beauty Myth?

In Defence of Barbie.

One thought on “Brynne Edelsten’s “No Barbie”, But Should She Aspire to Be?”