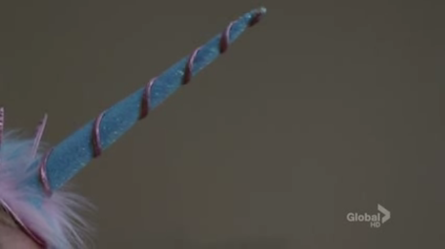 “When a pony does a good deed be becomes a unicorn, and he poops out cotton candy until he forgets he’s magical, and his horn falls off… then he becomes a zebra,” according to Brittany. Or rather, “A unicorn without a horn is just a horse,” as Burt Hummell puts it.

Take away all the Brittany-craziness and metaphors, and I am starting to relate to Glee like never before.

What Brittany is trying to tell Kurt—whose campaign for class president she wants to run—is that he’s unique, and he should never forget that.

As I wrote in relation to Glee’s season three debut last week, I’m struggling at the moment with not only believing in my uniqueness (or just in myself, period), but also having it recognised by others. But when you keep getting similar responses—“Everyone else has to get by with the daily nine-to-five grind, why shouldn’t you?” is a paraphrase that springs to mind—in the quest to realise your dreams, it’s hard not to become disheartened.

Kurt’s struggling with this, too, as he auditions for the lead male role in McKinley High’s production of West Side Story, which the co-directors, Coach Beiste, Miss Pillsbury and Artie, think he might not be masculine enough for.

Really incorporating a key element in the gender blogosphere this past year, Burt tells Kurt to stop sulking about being too flamboyantly gay to play a straight guy from the streets and to write his own realistic portrayal of gay characters.

Sing it, daddy! (I intended that to be less creepy than it came out!)

Brittany also makes a poignant point when she informs Kurt she’s decided to run for class president, too:

“You know, the last six senior class presidents have all been guys, and look where that’s got us: teetering in a double-dip recession.”

Finally, Glee’s starting to acknowledge some pertinent issues, minus the offensiveness. Maybe Santana’s right in saying that Brittany’s a genius, and a unicorn. We all are.

Related: Glee Back in Full Force.

6 thoughts on “TV: The Underlying Message in Glee’s “I Am Unicorn” Episode.”