Do these sex trafficking awareness ads do more harm than good? [Copyranter]

On Zooey Deschanel and “girlishness”. [HuffPo]

And from a link featured in the above article, Julia Klausner laments said girlishness:

“I’m begging age-appropriate females: Read something written before you were born. Stand up straight. Make sure you own one piece of jewelry that you did not purchase on Etsy. Use capital letters in an email to the guy you want to date. Let him take you out on a date, maybe not on a walk or an Xbox session, even if you are, God help you, addicted to LA Noire. Meet your friend for wine instead of fro-yo one night. Watch a movie with no early-’90s nostalgic appeal. Bitch, you already know Clueless by heart.” [Jezebel]

2 Broke Girls is not as bad as Jezebel thought. Nor is New Girl, for that matter.

Who is the Falling Man? [Esquire]

Mia Freedman on the dangers of teen sexting. [MamaMia]

In a similar vein, Erica Bartle tackles the online activity of teens. [Girl with a Satchel]

Dating while beautiful. [The Beheld]

The “power and politics” of being a tall girl:

“It’s funny—height, like physical strength, is one of those things we don’t really care much for in women because we say it upsets the ‘natural order of things,’ which is that men are the Protectors and women the Protected.  It’s all well and good to be the Protected, as long as you don’t consider the fact that the only way to perform your role well is to be physically vulnerable.  After all, if you are not vulnerable, what’s the point of having a Protector?…

“Yet it’s difficult not to notice that my height has given me very real advantages… like not having to deal with cowardly men harassing me as I walk down the street, or being able to push my way past predatory fraternity boys who tried to corner me in college, or standing my ground in large crowds, or taking up space in public, or a whole mess of other things that I take for granted that other women don’t get to experience.

“This is why I will always encourage women to develop their physical and mental strength.  There is no reason why physical power should be meted out simply by luck of birth.  A woman who is 5’2″ has just as much right to be here in this world as I do.  She has as much right to take up space and to walk down streets as I do.  It’s a damn shame that we live in a world that demands we fight for such basic human experiences, and I hope that someday in the future it’s no longer necessary, but until then, let’s not make it easy for those who want to take these rights away from us.” [Fit & Feminist]

The Detestable Self: what are your worst qualities? Mine are that I’m selfish, stubborn, unforgiving and self-righteous. But these are what make me, me, and at the end of the day, I like the way I am and I do enjoy being a bit selfish, set in my ways, grudge-holding and judgmental every now and then. [Girl with a Satchel]

The apocalypse is nigh: Mississippi wants to pass a bill that gives unimplanted, fertilised eggs personhood rights. [Ms. Magazine]

What’s a feminist voter to do?:

“Maybe, as with any other long-term relationship, feminism and liberalism simply grew to take each other for granted. Maybe we feminists got lulled into a false sense of security that liberals are our natural, stalwart and obvious allies, and wouldn’t display misogyny or old boys’ tendencies. It’s understandable, but a gravely simplifying loyalty and trust, if so, because misogyny is something that all of us can struggle with or exhibit—whether male or female (women engage in women-hating, self-loathing, and sexuality-hating behaviors, too), and whether liberal or conservative.” [HuffPo]

The conservative Gardasil debate between Republican presidential hopefuls Rick Perry and (God save us all) Michele Bachman. [The New Yorker]

“Weddings as Work.” Very interesting. Caitlin Moran touches on this in How to Be a Woman, which I will be reviewing in the coming weeks. [Kay Steiger]

How the banning of the burqa is “making things worse” in France. [Jezebel]

The dangers of seeking out an abortion at a “crisis pregnancy centre”. [Jezebel] 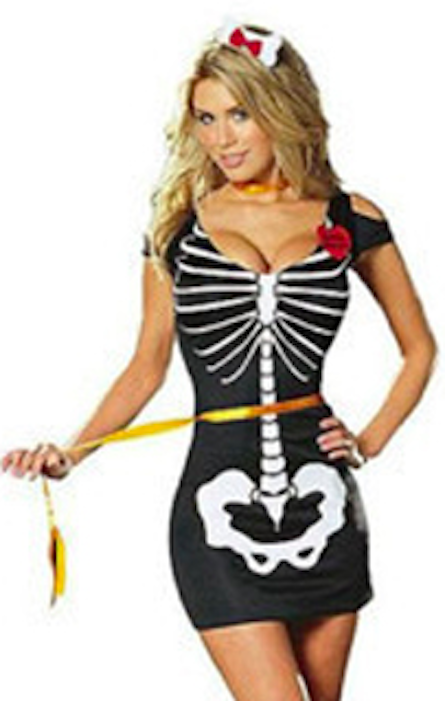 This takes the cake when it comes to tasteless and totally offensive Halloween costumes: sexy “Anna Rexia”. [Jezebel]

“How to Talk About Religion Without Starting a Fight.” Handy. [Jezebel]

How to tone down the sexy in the workplace. [MamaMia]

“The Seven Types of Book Lover.” I’m definitely—much to my fellow book lovers’ dismay—“the dog-earer” and “the underliner”. However, my weapon of choice is the highlighter. Which type are you? [MamaMia]

Camilla Peffer gives some advice on how to get work experience/internships. [Girls Are Made From Pepsi]

MTV, please stop supporting misogynistic artists such as Chris Brown and Tyler, the Creator. [Be Closer] 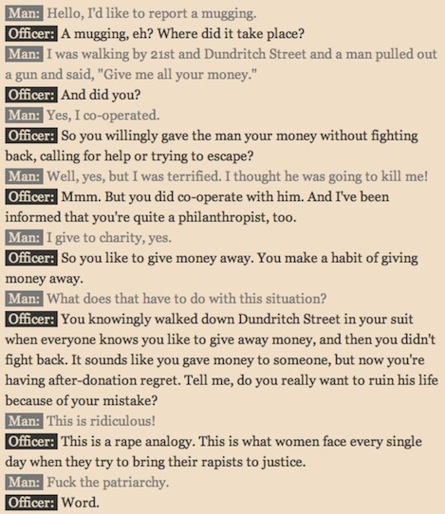 “The Cult of Muscularity.” [Bitch Magazine]

On Thylane Blondeau and the sexualisation of girls:

“Yes, that’s right. She’s wearing lipstick and heels. She’s wearing things that adult women wear and adult women are sexy. What else are those poor, poor men supposed to do? Here’s a thought: nothing. I’ve said it before and I’ll say it again. There was never a man in history who dressed his son up like him and was accused of pimping him out. If this girl’s mother dressed this way, she’d be considered classy, fashionable, and beautiful. So what’s the difference? They’re clothes, not sex, so why is it okay for an adult woman to wear these things in public, but not a child? Because clothes like this are considered to be no less than full consent to sexual advances. That’s what the problem is. It’s not the clothes, it’s not that she looks good, it’s not even that she looks sexy, it’s that people consider skirts, lipstick, and earrings consent to sex.” [Blogging When the Baby Isn’t Looking]