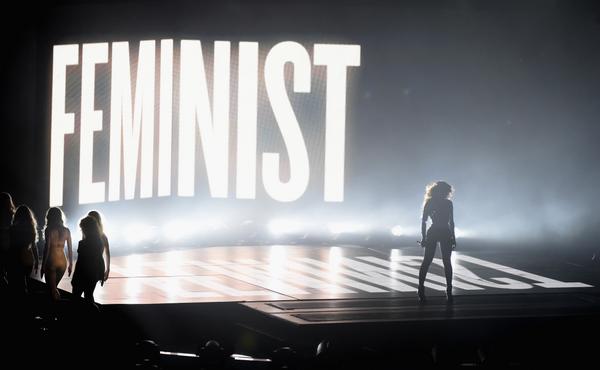 What Beyonce’s VMA’s feminist declaration means for the future of the movement in pop culture. [Slate]

Also, she may have solved its “branding” problem. [Bitch]

The New York Times called Michael Brown, the unarmed black teenager who was shot to death by police in the town of Ferguson, Missouri, “no angel”; see how that compares to their descriptions of white serial killers and mass murderers. [Vox]

Roxane Gay on women who take nude photos of themselves (and the fact that the non-consensual leaking of them is a crime):

“The Great Celebrity Naked Photo Leak of 2014… is meant to remind women of their place. Don’t get too high and mighty, ladies. Don’t step out of line. Don’t do anything to upset or disappoint men who feel entitled to your time, bodies, affection or attention. Your bared body can always be used as a weapon against you. You bared body can always be used to shame and humiliate you. Your bared body is at once desired and loathed.” [The Guardian]

You’re most likely not a “bad feminist”, to borrow the title from Gay’s latest book, you’re just an oversharer. [Salon]

Raising our daughters to be single women. [Daily Life]

Why won’t The Mindy Project, which is set in a gynecological practice, address abortion? [Jezebel]

You can also see me onscreen for the fledgling wrestling company with half-hour episodes showcasing local and international wrestling talent each Tuesday at 9:30pm on Channel 31 in metropolitan Melbourne and Geelong areas. For the rest of you, catch the show here. [Channel 31]

Yesterday I hosted the 76th Down Under Feminists Carnival, so if you’re looking for more (Aussie and NZ) feminist content, check it out.