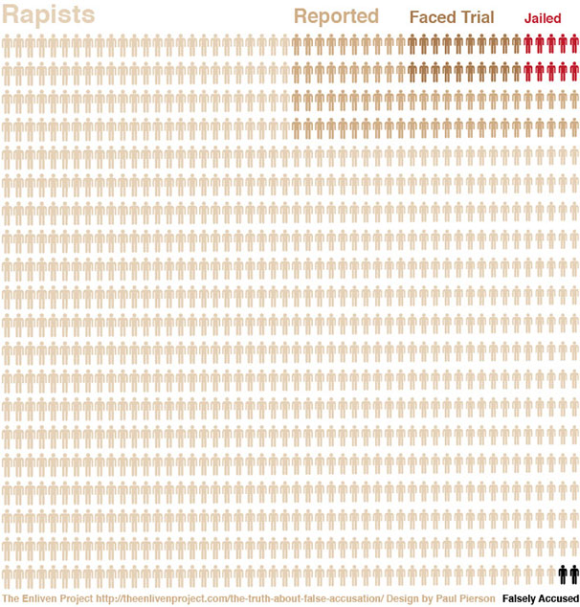 Think many rapes are reported falsely and the few actual rapists are punished for their crime? As this graph shows, you can think again. [Daily Life]

Interested in Melbourne’s gay culture and history? Go on this walking tour of Melbourne’s beats as part of Midsumma next weekend.

And while you’re at it, book tickets for Women Say Something‘s “Should We Destroy the Joint”, as Alan Jones so misogynistically termed women’s involvement in public life, panel featuring Gretel Killeen, Tara Moss and Catherine Deveny, on Saturday 19th January. [Midsumma]

Yay! Finally a famous female who identifies as a feminist. Although I wish it was someone I actually liked, beggars can’t be choosers… [Daily Life]

Where did all the African American rom-coms go? As a lover of black rom-coms like Two Can Play That Game and The Wood, I can certainly empathise with this author’s plight… [HuffPo]

Here’s a smorgasboard of articles attempting to unpack the now-defunct Nice Guys of OKCupid. [Jezebel, The Pursuit of Harpyness, The Atlantic, Daily Life]

What the modern incarnations of Sherlock Holmes get wrong about Irene Adler. [io9]

For those of you unfamiliar with the Steubenville High School Big Red football team rape and cover-up scandal, here’s a history of the town’s corrupt ways. [The Atlantic Wire]

Boycotting Chris Brown’s music is all well and good, but are we at a point where Rihanna’s blatant disregard for the impact her very public decision to get back with her abuser has on her impressionable fans and fellow battered partners alike means shunning her, too? Or is it just victim-blaming? Interesting piece. [The Peach]

Why does Tony Abbott keep ducking the “MamaMia crowd”? [MamaMia]

A breakdown of exactly what you can afford when you live on $35 a week as a family of four on the Newstart Allowance, as Families Minister Jenny Macklin asserted last week. [MamaMia]

In praise of nights in. [Girl Lost in the City]

25 kick-ass feminists you need to know about now if you don’t already. [Jezebel]

Mia Freedman was so unimpressed with Lady Gaga’s Sydney concert, she walked out of it! That doesn’t bode well for me; I’m going on Sunday night! [MamaMia]

If not supporting Gina Rinehart just because she’s a woman doing something in a male dominated industry makes me a bad feminist, then that’s what I am. [MamaMia]

In defence of using the word “vagina” when what we really mean is “vulva”. [Jezebel]