From “Battle of the Bands: Fictional Musicians VS. Their Real-Life Counterparts” by Emily Temple on Flavorwire:

“… How meta is this whole [Hannah Montana] story? Miley Cyrus plays Miley Stewart who is secretly also Hannah Montana who the real Miley Cyrus basically becomes in real life, before she becomes Britney Spears? This is not new territory of course, but it just re-blew our minds.”

By the looks of the accompanying photo of Miley pole dancing, it looks like she already has become Britney. “Gimme More”, anyone?

Elsewhere: [Flavorwire] Battle of the Bands: Fictional Musicians VS. Their Real-Life Counterparts.

It’s hard out there for a pimp male model. MamaMia profiles “Male Models. Inside Their Straaaange World”, and how images of “buffed” and “ripped” men on magazine covers might affect male body image.

Hannah Montana is the superhero of the modern generation.

“Freelancing means being so poor and so hungry for so long that you ‘eat’ a bowl of soup that’s just hot water, crushed-up multivitamins and half your spice rack…”—according to Richard Morgan, in “Seven Years as a Freelance Writer, or How to Make Vitamin Soup”.

Sex in the Digital City writer, Kitty Tonkin, details how she unplugged her iPod on public transport and had a good, old-fashioned conversation with an elderly man on the train. He talked about the old days, and the kinds of values they had back then. While some of his views were certainly outdated (“women need to learn and remember that it’s a man’s role to fish”), Mystery Train Man did drop such gems of wisdom as “feminism has warped views in society” and “romance is so cheap [wine, fish and chips overlooking the ocean] people have no excuse”. 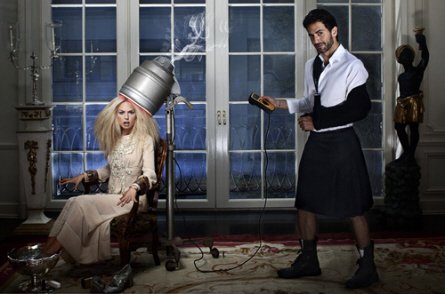 Tiger Beatdown has some interesting views on the “Love The Way You Lie” video. While I think both the song and the film clip accurately portray the cycle of domestic violence, author Garland Grey asserts that both glamorise the situation. View the video and the article, and you be the judge.

Any LOSTies out there still mourning the end of the series? io9 hits it right on the head in “12 Theories About Lost That Were Better Than the Actual Show”, acknowledging that half the fun of watching the show was formulating our own hypotheses about its mysteries.

The Thought Experiment writes about “the cinematic discourse established by director Rob Luketic employs the consistent rhetorical metonymical device of synecdoche to psychologically reinforce the theme of a woman’s appearance…” in Legally Blonde. Or, in layman terms, the film deals with “the constant breaking of the women down in to digestible parts when they are focussed on Warner. This is important because, to a man like that character, taken as a whole, what are we ladies? Too much to chew on, it seems.” Great article.

While our country might be in the midst of a hung parliament, Mia Freedman exerts her feminist stance on the issue in her profile of Julia Gillard: “Would she describe herself as a feminist? ‘I would. All my life I’ve believed that men and women have equal capacities and talents. That means that there are as many smart women as there are smart men and it means there are as many dumb women as there are dumb men. So we’re equal and consequently there should be equality in life’s chances.” Now go bag that Prime Ministership, Julia! (You can also read Freedman’s journey to interview Gillard here.)

Jezebel loves herself some Mad Men. This time around, the feminist blog profiles the show’s stance on “The Psychology of Women”.

Elsewhere, on the “psychology of men” stratosphere, “Can Superheroes Hurt Boys’ Mental Health?” When I said to a male friend that I wasn’t really into superheroes, he said I mustn’t have any daddy issues, ’cause people with daddy issues love superheroes. Well, I have no shortage of daddy issues, and I am dressing as Cat Woman for my Halloween/birthday party, so I guess that proves his point. And so does the article.

Johnny Depp has pulled of many a character, which is no mean feat. The fact that he’s managed to be “doable in pretty much every role is an even bigger accomplishment”.

Once again, women just can’t win. The latest study to prove this shows that “men whose wives make more money than they do are more likely to cheat”. Take a bow, Jesse James, Ryan Phillippe et al.